Team England experienced heartbreak on Saturday afternoon after a disappointing 51-60 defeat to world number one side Australia in the 2022 Commonwealth Games semi-final.

The home side have just one match remaining and will now face New Zealand in the bronze medal match on Sunday, ahead of an Australia versus Jamaica final.

A sell-out crowd welcomed Team England to court with a standing ovation, as they stepped out to face world number one side, Australia. Boasting the first centre pass, Team England appeared focused and up for the fight, however a penalty in the shooting circle gave Australia the chance to record the opening goal. Swiftly afterwards, Australia were penalised for breaking and England had the opportunity to level the score.

A feisty encounter in the defensive end saw Layla Guscoth collide with the post, resulting in a stoppage in play as a new post was installed. As the play resumed, Francis-Bayman won aerial ball to continue England’s campaign. Seamless transitions from Metcalf to Harten, to a waiting Housby under the post saw the scoreboard tick over, but it was Australia who took the early lead, finishing the quarter ahead by three.

Team England returned to court with Laura Malcolm at centre and Jade Clarke moving to the wing defence spot in place of Stacey Francis-Bayman. Australia meanwhile remained unchanged and instead opted to increase their lead with a tightened defensive effort through court, applying more pressure to reigning Commonwealth champions England.

Struggling to open up opportunities in the attacking circle, Head Coach Jess Thirlby rotated the bench bringing Ellie Cardwell and Imogen Allison into the mix. A familiar trio from their domestic leagues, Metcalf, Cardwell and Malcolm soon settled into the changed line-up and began to deliver the excellence that saw them lift the Vitality Netball Superleague (VNSL) trophy in 2022. It was Australia who pushed on and maintained their six goal lead heading into the second half.

A strong start to the second half from England soon faltered as contact calls were made up and down the court. Pushing the shooters right to the line, England’s defensive unit contested every single ball but Australia’s dynamic movements of Gretal Bueta and long bombs from Steph Wood quickly widened Australia’s lead once again to ten.

Swapping up her line-up, Thirlby rung the changes once again with Francis-Bayman heading into the circle and Clarke returning at centre. Keeping their cool and increasing their work rate, England attacked every ball with defiance and with an injection of energy into the circle, Housby and Cardwell soon found their groove and closed the gap to nine.

Just 15 minutes stood between England and a place in the final. Working tirelessly to keep the ball safe; it was mere minutes before Mentor was awarded a backline and the chance for England to begin their final push. Metcalf and Malcolm held strong on the attacking circle edge, drawing Australia’s defence out leaving Cardwell wide open under the post. Usoro-Brown entered the mix as the clock ticked down, but it was all but too little too late, England had left a mountain to climb. The final whistle sounded, and it was Australia who, after a world class performance, had secured victory and with it, a place in the 2022 Commonwealth Games final.

Just one more run out for Team England remains on Sunday 7 August, as they go for bronze versus New Zealand. Witness all the action LIVE on BBC iPlayer at 1:30pm.

Loved being in the crowd or watching from home? There's more live netball coming your way in England this October - book tickets now. 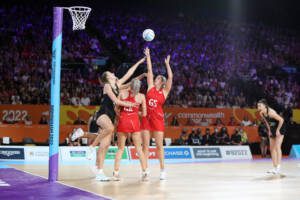