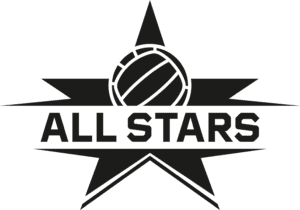 The Vitality Roses got off to a flying start against an unchanged All Stars side with Eleanor Cardwell and Natalie Haythornthwaite using the circle edge to find the perfect position under the post.

Using their time to its full advantage, the Vitality Roses had soon secured a two-point lead over the international VNSL side in the opening minutes of the game.

Whilst in the defensive end, eager to disrupt Thunder teammates’ Laura Malcolm and Cardwell’s familiarity, Sam May of Loughborough Lightning took a flying interception to turn the incoming ball.

Aware of the ‘no look’ passes from Leota in their first encounter, Vitality Roses' Razia Quashie increased her speed and physicality to shut down the incoming high ball. The game, increasing by the second in intensity, finished the first quarter with the Vitality Roses ahead by four.

With no changes to either side, the second quarter got underway with the All Stars eager to close the gap on their opposition. Upping the pressure on their opponents, the All Stars stuck to their players and forced a held ball on Vitality Rose Helen Housby.

Unwilling to succumb to the gravity of the error, Commonwealth Games winners Serena Guthrie, Haythornthwaite and Housby retaliated with a perfect two pass feed into the circle to claim the following point. Moving to centre position, with Team Bath’s Imogen Allison taking the wing defence bib, Guthrie switched up a gear, encouraging her side to follow suit and increase their lead.

In All Stars attack, Leota continued to impress, faking a pass before sending the ball over for Wasps Netball newcomer Gezelle Allison to sink the ball out wide. Another no goal on the buzzer for Mvula saw the All Stars head into the second half trailing by seven.

With Team Bath young gun Sophie Drakeford-Lewis taking on the goal-attack position for the third quarter and Layla Guscoth joining Quashie in the defensive unit, Head Coach Jess Thirlby’s second half changes provided the Vitality Roses side with a much-needed energy boost.

With just thirty minutes left on the clock, Guscoth’s fresh set of legs sought to halt the incoming speed of All Stars Leota’s pinpoint feeds.

Meanwhile, Jo Trip fought tooth and nail to force error and snatch up any loose balls in the Vitality Roses’ circle. Despite swapping Trip for Fi Toner mid-way through the quarter, more flying interceptions from May allowed the All Stars to capitalise and increase their score.

The Vitality Roses however, remained unaffected, widening their lead with Drakeford-Lewis and Cardwell holding their defence close, before rolling away in the last second to open up space in the circle. The Vitality Roses entered the final quarter ahead by a comfortable thirteen points.

With just 15 minutes standing between the Vitality Roses and a series victory, Head Coach Jess Thirlby made her final changes of the night, bringing England stalwart Jade Clarke to the centre position, moving Housby to goal shooter and giving Fran Williams much needed court time in the goal keeper bib.

Meanwhile on the All Stars side, Head Coach Karen Grieg rotated her bench with Trip returning to goal defence, Nat Panagarry stepping into the centre circle and Strathclyde Sirens’ Gia Abernathy resuming the wing defence spot.

Eager to see the impact of two goal attacks in the same circle, all fears were quashed as Housby continued to add to her almost perfect shooting percentage and allowing her calmness to wash over her younger counterpart.

Relying on her familiarity with NSW Swifts teammate Housby in the circle, co-captain Hayhtornthwaite spotted an opening and sent a long ball into a wide open Housby for an unchallenged shot at goal.

Despite All Stars captain Leota reading the game, slowing the pace and allowing the shooters chance to regroup, the Vitality Roses pushed on and wound down the clock, running out with a victorious 23-goal triumph.

Providing consistency, support and a true captain’s performance throughout the entirety of the match, co-captain Haythornthwaite was named Player of the Match after leading her side to success.

The two sides return to court on Sunday evening for the final instalment in the three-match series. Don’t miss all the action on Sky Sports from 6.15pm.