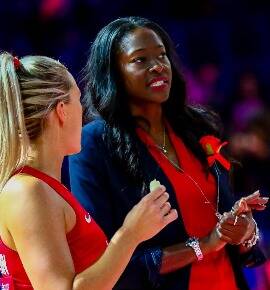 Vitality Roses Assistant Coach Sonia Mkoloma joined on a full-time basis in May 2021 after two previous experiences working with the team.

She was appointed England Netball Assistant Coach for a development tour in October 2019 to Australia and New Zealand, and was part of the coaching team for the UK-based 2020 Vitality Netball Nations Cup.

Sonia spent 15 years of her playing career representing the Vitality Roses, in which time she amassed an incredible 123 international test caps. On the international stage the London native competed in five Netball World Cups and three Commonwealth Games.

Her playing career ended in Australia where she transitioned into a coaching role as an U19 NSW National state team Assistant Coach in 2015, before becoming a Technical Coach for the NSW Swifts helping them to win the Suncorp Grand final in 2019.

Sonia Mkoloma: “I’m just going to give back to the girls and create an awesome team”