With Vitality Netball Superleague clubs facing their last games of the season and looking ahead to finals weekend, there were some excellent matchups that took place in Round 20 of the competition.

In the ANZ Premiership, George Fisher’s Southern Steel found themselves in an extra-time decider in their Round 12 meeting with Robinhood Stars.

In the latest installment of the Suncorp Super Netball season, the final quarter made all the difference as Eboni Usoro-Brown’s Queensland Firebirds went head-to-head with Stacey Francis-Bayman’s West Coast Fever.

Here’s how the Vitality Roses fared in all competitions…

It was a tight contest at the Emirates Arena on Friday night as Strathclyde Sirens played host to Wasps. The last time these two sides faced each other was at the Season Opener weekend in Birmingham in which Sirens secured a 44-50 victory.

The match got underway with a high level of intensity from the offset, with both teams focused on securing the win.

Sirens took the first centre pass but an intercept from Wasps saw them move the ball up the court and score the fixture’s first goal.

In the final quarter and with three minutes left to play, Sirens were level with Wasps on 40 goals.

Wasps managed to play a quick ball into the circle despite some tough defence from Sirens and they converted the shot, gaining a one-goal advantage.

Possession then changed hands multiple times following a flurry of turnovers but Sirens found themselves with the ball inches inside the circle perimeter and staying cool under pressure, the long-distance shot fell through the net, bringing the score to 41 apiece with one minute left to play.

A looping pass from Wasps fell into the hands of Rachel Dunn who converted her chance well under the post to make the score read 41-42.

With 30 seconds left to go, Sirens had an opportunity to draw level but their shot bounced off the rim and was caught by Wasps who seized the opportunity to run out the clock with some simple passes to see out their win (41-42).

London Pulse secured a victory at home to Leeds Rhinos after four action-packed quarters at the Copper Box Arena.

Jade Clarke took the first centre pass to get Rhinos’ last game of the season underway and was focused on creating chances from the go, noting 27 feeds.

Despite leading after the first 15 minutes, it wasn’t easy for Rhinos to penetrate Pulse’s defence with Funmi Fadoju’s defensive presence. She earned eight turnovers and 11 deflections for her side.

With Olivia Tchine’s accuracy in front of goal, totalling 27 goals, it wasn’t long before Pulse had earned themselves a lead which they retained to secure the win, ending the match leading 52-45.

Team Bath Netball secured a win against Saracens Mavericks in their away fixture on Saturday.

Team Bath quickly led on the scoreboard, ending the first quarter with the score 10-17 in their favour.

Mavericks came out strongly in the second quarter of play, moving the ball around efficiently and reducing their deficit to two goals as they entered the half-time break (25-27).

Team Bath upped the intensity in quarter three and with some great defensive pressure from Layla Guscoth and Natasha Pavelin, Mavericks were only able to score five goals, entering the final quarter of action with the score 30-45 in Bath’s favour.

Quarter four was a closely contested battle. Mavericks displayed determination to overturn the result and scored two goals more than Bath in the final 15 minutes, but it was too little too late for their side as Team Bath walked away victorious, closing the match with a 13-goal lead (46-59).

Strathclyde Sirens bounced back from Friday’s defeat against Wasps with an away victory against Severn Stars.

Liana Leota’s Stars held a four-goal lead over the visitors after the first 15 minutes but Sirens answered back, outscoring their opponents in the remaining three quarters of the match.

Despite a positive performance by Paige Reed, who totalled seven feeds and 13 goals, Sirens were determined to close their season with a win and went on to seal an eight-goal victory (40-48).

With both sides firmly in the top four and looking ahead to the semi-finals, it was a great contest between Manchester Thunder and Loughborough Lightning at Belle Vue on Monday Night.

Thunder took the first centre pass to get the match underway and both sides immediately began to trade goals.

Lightning’s Nat Panagarry passed the ball up the court with pinpoint accuracy to set up shooting opportunities for Mary Cholhok and Ella Clark, who were finding space in the circle well, but for every Lightning offence, Thunder responded equally well with Eleanor Cardwell finding no trouble in sinking her attempts.

At the end of the first quarter, just one goal stood between the two sides with Thunder holding a 20-19 lead.

As both sides entered the half-time break, it was Thunder who had carved out a narrow lead, entering the third quarter 39-35. 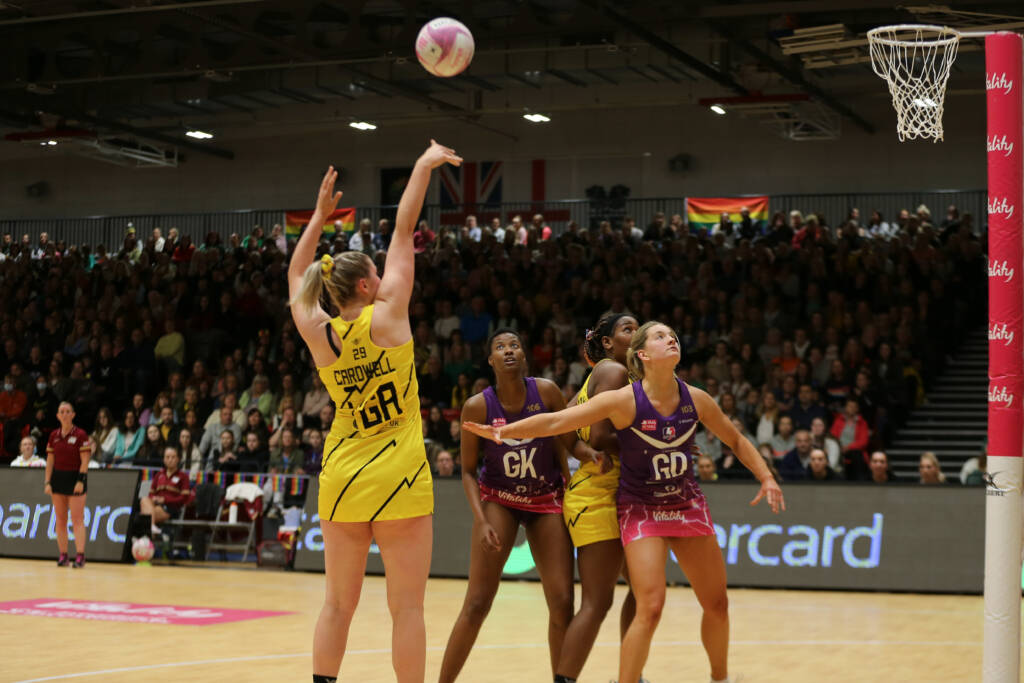 Vitality Netball Superleague match between Manchester Thunder vs Loughborough Lightning at the Belle Vue Sports Village on May 30th 2022 in Manchester, England.

(Photo by Stephen Gaunt of Touchlinepics.com for Manchester Thunder)

Thunder’s Natalie Metcalf had her eyes focused on creativity, feeding 28 passes into the circle for Cardwell and the shooter converted well, scoring 29 goals throughout the match.

At the other end of the court, Lightning’s Hannah Joseph was also focused on creating scoring opportunities as she recorded 23 feeds into the circle.

As both teams returned to the court for the final 15 minutes, the score read 55-50 to Thunder.

The fourth quarter was a display of pure determination. Thunder had their hearts set on retaining their unbeaten record and they were successful in this quest as they ended the match with a 71-63 lead.

George Fisher’s side Southern Steel suffered a narrow two-goal defeat at the hands of Robinhood Stars as their match entered extra time on Sunday.

At the end of the fourth quarter, Steel and Stars found themselves locked at 56 goals each.

Despite Fisher scoring three out of three in extra time and only missing one of her total 46 shot attempts over the course of the game, Stars were able to outscore Steel in extra time to edge themselves to a two-goal victory (60-62).

Housby notched 33 goals for Swifts but the defensive pressure from Magpies, including Mentor earning seven deflections, proved too strong as they ran out 66-58 winners. 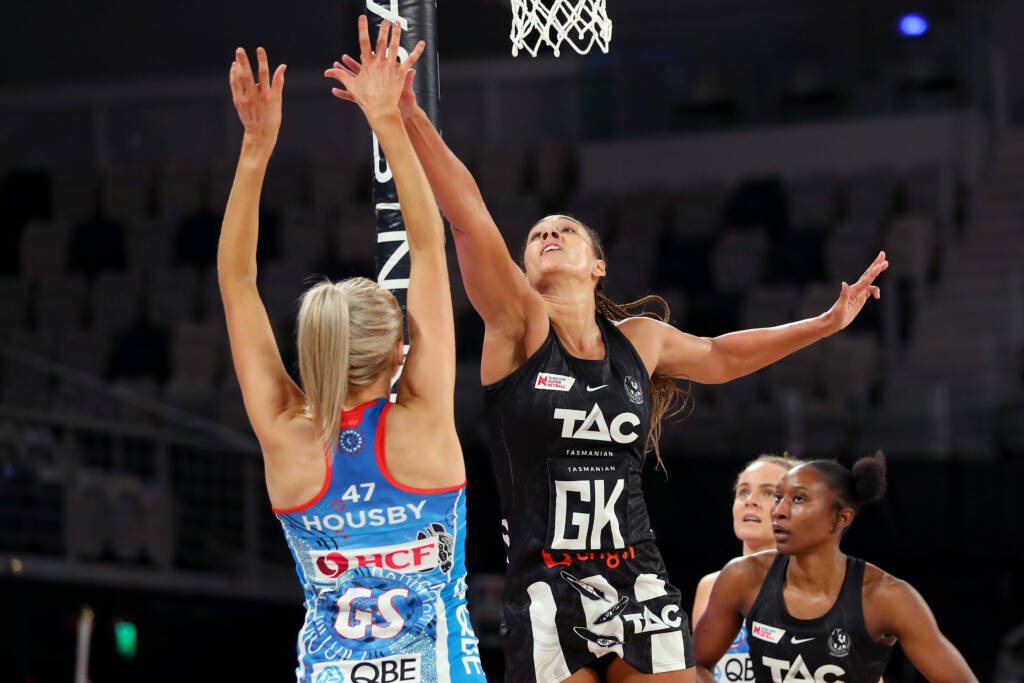 MELBOURNE, AUSTRALIA – MAY 28: Geva Mentor of the Magpies defends during the round 12 Super Netball match between Collingwood Magpies and NSW Swifts at John Cain Arena, on May 28, 2022, in Melbourne, Australia. (Photo by Kelly Defina/Getty Images)

Eboni Usoro-Brown’s Queensland Firebirds recorded a win against West Coast Fever in their Round 12 meeting.

With the scores matched at 53-all at the end of the third quarter, there was everything to play for in the final quarter of action.

Stacey Francis-Bayman’s West Coast Fever battled valiantly in search of victory but it wasn’t meant to be for her side with Firebirds scoring four more goals to claim the win (68-72).

Lastly, Jo Harten’s GIANTS Netball secured the win over Adelaide Thunderbirds at the Ken Rosewall Arena in their Sunday fixture.

Harten, who also appeared in the latest episode of Off the Court, contributed 27 goals to her side’s 59-50 victory. 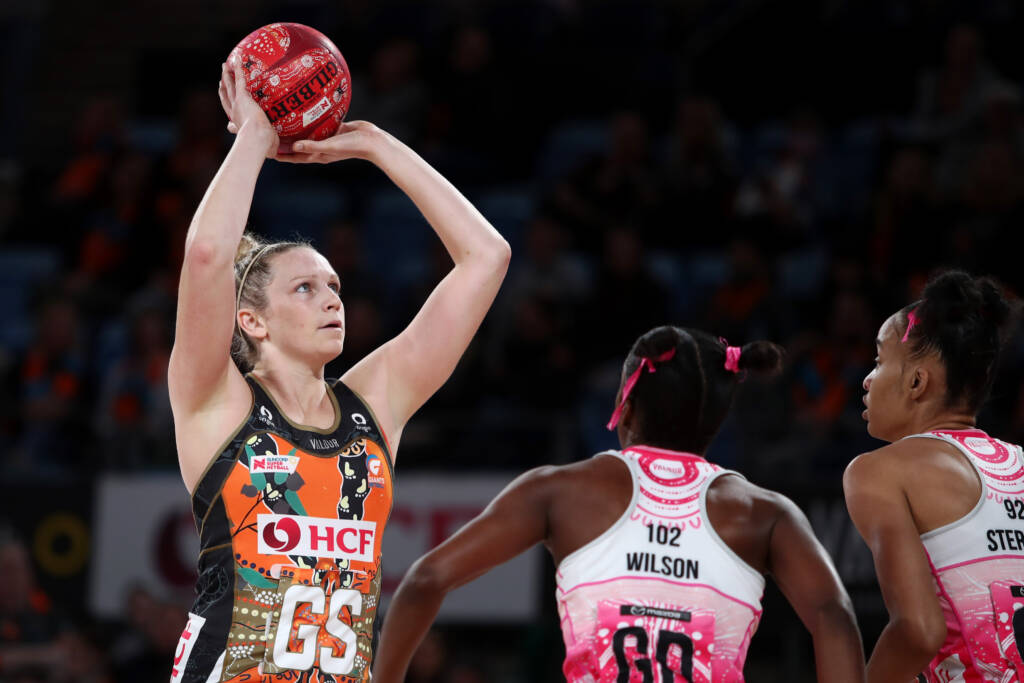 SYDNEY, AUSTRALIA – MAY 29: Jo Harten of the Giants shoots for goal during the round 12 Super Netball match between GWS Giants and Adelaide Thunderbirds at Ken Rosewall Arena on May 29, 2022 in Sydney, Australia. (Photo by Jason McCawley/Getty Images)