At the age of just 21, Amy Carter has already achieved so much both on and off the netball court.

The sport she played as a child has become a haven for Carter, an England Future and Vitality Netball Superleague (VNSL) champion.

Carter has years of netball ahead of her but has done all she can to ensure her early endeavours have been filled with prosperity and promise.

“I was always sporty”

Carter burst onto the scene as a teenager for both her country at youth level and in the VNSL with Manchester Thunder.

She made her name in the Black and Yellow dress in 2018, putting in numerous Player of the Match performances for her franchise.

Her form was even more impressive considering she was just 18 and had joined her first-ever netball club approximately seven years prior.

“I was always a sporty child. I did a lot of cross country when I was younger and my parents put me into every sport until I chose the one that I wanted to do. I got into netball in primary school and really enjoyed it. I then went to my first club when I was about 10 or 11,” said Carter.

“I joined because a coach at one of my netball summer camps told everyone to join a club. The camp was recommended by my primary school teacher, who was really passionate about netball.

“I then moved to Tameside Netball Club and had two coaches there, Paul and Sarah Harper, who had belief in me and trained me up to standard. I definitely owe a lot to them.” 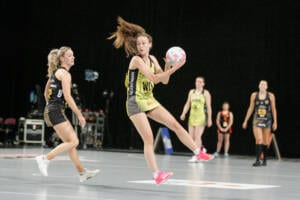 Carter, who is studying medicine at university, was also named U21 Coaches’ Player of the Year in her first full season at senior level.

She had spent years fine-tuning her mid-court skills not only at Netball Performance League (NPL) and at international level but when she first started playing in primary school.

The youngster has cemented her place as one England’s most promising young centres which has resulted in her participating at Netball Europe competitions and at the World Youth Cup.

“I started off as a centre and had a little stint at goal defence which didn’t last long before I went back to the centre,” she explained.

“I don’t know what originally attracted me to that position but I’m happy that I was.

“I’ve tried other positions in training at times but not too seriously. I’ll sometimes try a little bit of goal attack but that never works out well for anyone.”

“My parents really supported me”

Growing up, Carter was part of the first generation where netball and the VNSL became accessible on television.

As a result, she looked up to the stars of the era such as Team Bath’s Serena Guthrie. As she became more experienced, her idols began to be drawn from further afield.

“My idol was probably Serena Guthrie when I was younger and I feel more recently it has been Laura Langman after her being part of the New Zealand team winning the Vitality Netball World Cup in Liverpool and just watching her play in Suncorp Super Netball. She’s really inspired me,” she said.

“I’ve also had people who I’ve looked up to in my Manchester Thunder career and people that have advised me like Liana Leota, who has definitely given me a lot of input.

“The people who have had the biggest influence on my netball career would have to be my parents because they’ve really supported me and helped me through it. I don’t think I would have got to the stage I am at without them.”

“Playing for England became a dream”

Her talent had been capturing the attention of selectors at international level and, after making various appearances and numerous competitions at youth level, she was selected as an England Future in 2018

Carter remains an England Future and has subsequently gained valuable experience with the Vitality Roses. Towards the end of 2019, she was selected as one of 15 athletes to go on a tour of Australia and New Zealand with newly-appointed Head Coach Jess Thirlby.

She, however, never envisaged donning the red dress in any capacity until she was selected for the U17 side when a senior call-up became her main aspiration.

“I got into England U17s originally and then went to Netball Europe. I then progressed through to U19s. I then did a Jamaica tour for England U19s and then got into the U21 long squad for the World Youth Cup,” she said.

“After a few tours of South Africa and New Zealand, I was named in the Futures programme and have been there for the last two years.

“When I first started, I didn’t think about a call-up. It became more of a dream when I got into England for the first time for the U17s. I’m happy to have small targets to hit and then have another target to hit to progress up.”

“My goal is to win my first cap for my country”

Carter ended 2019 with the news that she would be part of the squad for the Vitality Netball Nations Cup in January 2020.

Matches against New Zealand, Jamaica and South Africa offer her the opportunity to win her first senior cap for her country.

Making her first appearance for the Vitality Roses at a competitive level would tick off another of her major objectives in what could be a stellar year for the young athlete.

“When I initially started playing, I just enjoyed it and I still do. My long-term goal is to just still enjoy it and have fun with it, to enjoy the friendships, the challenges,” she said.

“I’ve always had the aim of playing for the senior Roses team but I’m quite realistic as a person so I like to take it step by step.”