The celebration of Eid al-Adha commemorates many important traits including commitment, sacrifice and faith.

The annual festival brings Islamic people together all over the world and – from Monday 19 July to Friday 23 July 2021 – will once again be a period of rejoice for Muslims in the UK.

These traits and feelings of togetherness are on show all year round on netball courts across the country. None more so than at Revolution Netball.

Revolution Netball is situated in Waterloo, London, and provides a space where Muslim women can come together to play a sport they enjoy in an environment that welcomes them with open arms.

The club started four years ago with a small group of girls from a collection of different London universities so their original members could meet new people, develop new skills and make time for sport.

It has since developed into a club with more than 60 members which regularly sells out its weekly sessions. Revolution Netball now stands as a symbol of inclusivity right at the heart of netball.

“A girl called Faiza went to London School of Economics (LSE) and decided to make her own club.

“She got a group of six girls together and LSE said that if they did it through a society, they could put in a grant proposal and give them some money for it. The logical society to put it through would be ISOC – the Islamic Society – and we got the grant.”

Amina, who was studying Biomedical Science at nearby St George’s, University of London, found the team through Facebook and decided to join a session when there were just enough members to play half-court netball.

After falling in love with the club, she decided to advertise the team through Instagram and – almost instantly – had girls from at least eight different London universities come and join.

The welcoming environment and word of mouth allowed the club to prosper, allowing Muslim students to be comfortable in picking up a ball for the first time since their school PE days.

“I decided to join the committee and we wanted to expand it. We gave one girl from each uni the title of a University Representative. It was just their goal to recruit more girls to come and play with us,” said Amina.

“The girls loved it. We were booked out every week and it was such a nice environment. A lot of girls said they found it difficult to make friends at university but made friends at our netball club.

“A few of them said that this is the only sport they play during the week and it’s nice to provide a safe place for them to wear what they want, not be judged and exercise for two hours a week.”

In 2020, to allow graduates to continue playing, ISOC Netball became Revolution Netball and evolved into an independent club which brought a new set of challenges for a group who had never run a team before.

Without being associated with a university, the club could no longer receive grants and invested their own money into necessities like bibs with inexpensive membership costs just about covering the courts.

For Amina, whose new role ensures the smooth running of the club, investing both time and money into a team that meant so much to so many people was a no-brainer.

“We didn’t mind because we loved the club so much. We put our heart and soul into this club, and so many girls love the environment so we thought it was worthwhile to invest,” she said.

This environment is forged on the principles of inclusivity; whether that be first-time players or county athletes, different religions, and different backgrounds. Such an energy is why, Amina believes, the club continues to succeed.

“You don’t need any netball experience at all and we teach them the rules as it goes on. We have a girl who plays at county level and I play for a little club in north London so we take what we have learned and show them on court.

“We have ‘give-it-a-go sessions’ for £1 because girls are quite scared to come to a club they find on Instagram. You don’t know until you turn up. We let them try it for one day and give awards at the end. Creating a nice environment is key to having players returning each time.

“They love it because they can have little ability at first and just be able to play without being judged. It’s not competitive, just friendly.”

Providing a positive space for Muslim athletes is more important than you might think. According to Amina, ‘Muslim girls don’t play sport’.

As per a Women In Sport survey, Muslim females in England are more likely to be inactive than any other women with only 50.7% partaking in regular exercise.

Revolution Netball is helping to provide these positive experiences. How does their Club President think clubs can bring more Muslim players in to the game? 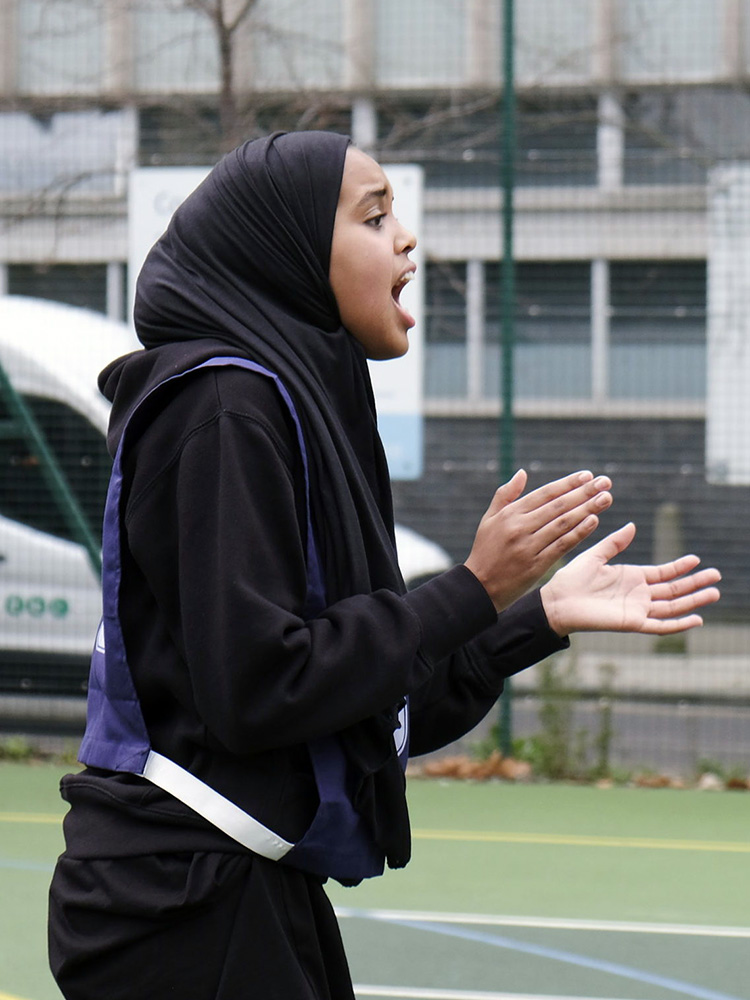 Amina Hassan, a student at St. George’s, University of London, serves as captain of the ISOC Netball Team. RNS photo by Aysha Khan

“Some simply don’t know how to carry on playing. Not a lot of girls know that there are netball clubs dotted around in each neighbourhood. I typed in my address on England Netball’s website and I just went along. If they know they can do that, they will.

“Loads of girls just don’t know netball – they want to be with girls their age but might not have the ability. Just show them that you don’t have to compete or you won’t be upset with them if they drop a ball or do footwork.

“Netball is like a sisterhood. Those 11 or so players in a team are literally sisters. It’s about making people feel like they will be welcomed into that sisterhood.”

So what is next for Revolution Netball? England Netball member Amina and the rest of the club are eyeing further expansion and wish to become an affiliated England Netball club to better help their members.

The promise of further locations, better coaching and more sessions from a club that is doing so much for their local community and young women, can only be a good thing for netball hopefuls in England’s capital.

“We want to expand and possibly have two locations. We started putting on Sunday sessions for people who couldn’t make Wednesday through work, and we just sold out our most recent one.

“We have a few really good players so we are looking to get affiliated. You need coaches who are qualified so we’re looking to get some of the girls to do the courses from September so we can enter a local league so we can start a competition team.

“We also want to hire a coach for September to give the girls a few tips because they’ll definitely be more experienced than us. The goal is to get affiliated and have some qualified coaches and umpires amongst us.”

You can find out more about Revolution Netball on their website and by following them on Instagram.

If you are looking to join a netball club, use England Netball’s session finder to find your nearest team. 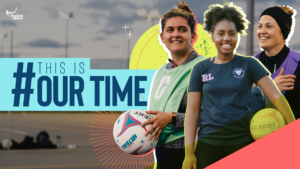 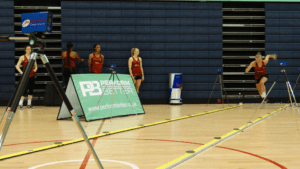