54 teams from more than 40 schools from across the country will come together this weekend for the National Schools Finals in Peterborough.

Taking place at Oundle School for the first time, teams representing three age categories – U14s, U16s and U19s – will contest in 18 rounds of matches, with the U14s and U16s in action on Saturday and the U19s taking to court on Sunday. The best four teams from each age group will then compete in semi-finals followed by finals and third place play-offs before the trophy presentations.

Around 1,500 schools take part in the National Schools Competition each year, with the top two sides from each age category from each region qualifying through the Regional Schools Finals to make it to the finals weekend.

Amongst the schools in attendance, 2019/20 U14 winners, Berkhamsted will be back to defend their title along with runners up, Putney High School who will be looking to go one better this time around.

In the U16 category, Guildford High School will be hoping to repeat their success from 2019/20 whilst The Grammar School at Leeds will be wanting to push themselves to the later stages after just missing out last time.

Meanwhile in the U19 competition, none of the final four from the last played competition have made it to this year’s final. Millfield School, who finished fourth in 2018/19, return after missing out on the competition last time round.

The event will kick off at 10:00am on Saturday morning with the U14s and U16s who will contest the finals from approximately 4:05pm. The U19s competition will start and end at the same times on Sunday.

The British Army will be supporting and attending the finals and will be engaging with the teams in attendance through fun activities such as the batak board to test hand eye co-ordination, a buzzwire to test steady hands, plus more.

Winners from each age group will be given the opportunity to attend a Leadership Day led by the British Army.

For more information on this year’s National Schools Finals including the upcoming fixtures, click here. 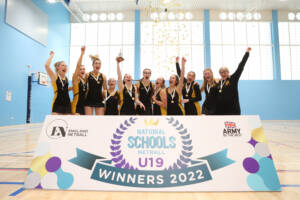 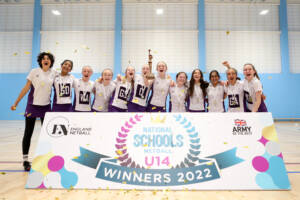