Team England made it five from five and secured top spot in Pool B after a 44-54 victory over world champions New Zealand.

The result means Jess Thirlby’s side have set up a semi-final clash against Australia which will take place at 14:30 on Saturday 6 August.

After the game, we spoke to Geva Mentor and Jade Clarke…

“Obviously it was a great first quarter for us, but we let them back in. We managed to ride the wave after half-time, and we’re just happy that we were able to pull away – the crowd really lifted us in those last few moments.

“It’s about the grind, and the grind comes to fruition in the last few minutes. They made a lot of changes and had to bed in their attacking combinations, so it was nice to get on top of that and capitalise. Everyone just played their role and it’s really great to see.”

…how important the crowd were

“Oh, so important and they were phenomenal tonight and it’s probably after everyone’s bedtime as well. I’m not even sure what time it is, but to have a 9pm game and to have a crowd that’s just roaring and particularly when we do fantastic plays down the court, whether it’s Imogen Allison getting tips or Eleanor’s shooting long bombs, the crowd just really lift and that lifts us as well.

“We really thrive off that energy and I think that home court advantage is going to really be beneficial for us coming into semi-finals.”

“I just can’t describe how amazing it is to step out. It gives me goosebumps, the lights are off, they’ve all got their torches on.

“I just feel like they’re part of the team and it just gives us a boost every time we have a dip in play or the momentum goes against us, they are chanting, they’re on our side. So it is so amazing to have them on our side.”

“I just love being a Rose, and I’ll play till they kick me out but I’m just enjoying the journey and I’m learning a lot.

“We’ve got amazing coaches here and I’m just soaking it all in and just love being part of the team and taking inspiration from Geva Mentor who’s been playing even longer than me.”

Team England come up against Australia in the semi-final with first centre pass at 14:30 (UK time) on Saturday 6 August. Here’s a guide to the competition, including how you can follow all the action. 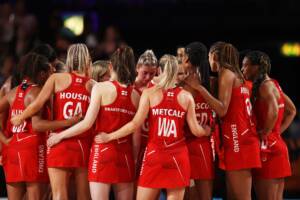 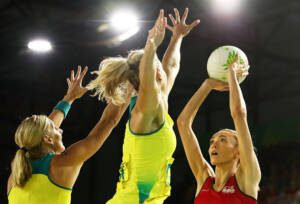