The Big Netball Conversation is England Netball’s annual survey to all of our members, programme participants, coaches, officials, volunteers or spectators. It tracks and provides annual ratings for a number of customer service measures, as well as providing annual trends on a number of attitudinal and behavioural measures.

After a fantastic year with the Vitality Roses being crowned Commonwealth Games champions for the first time in history, it was great to hear lots of positive feedback from our members. 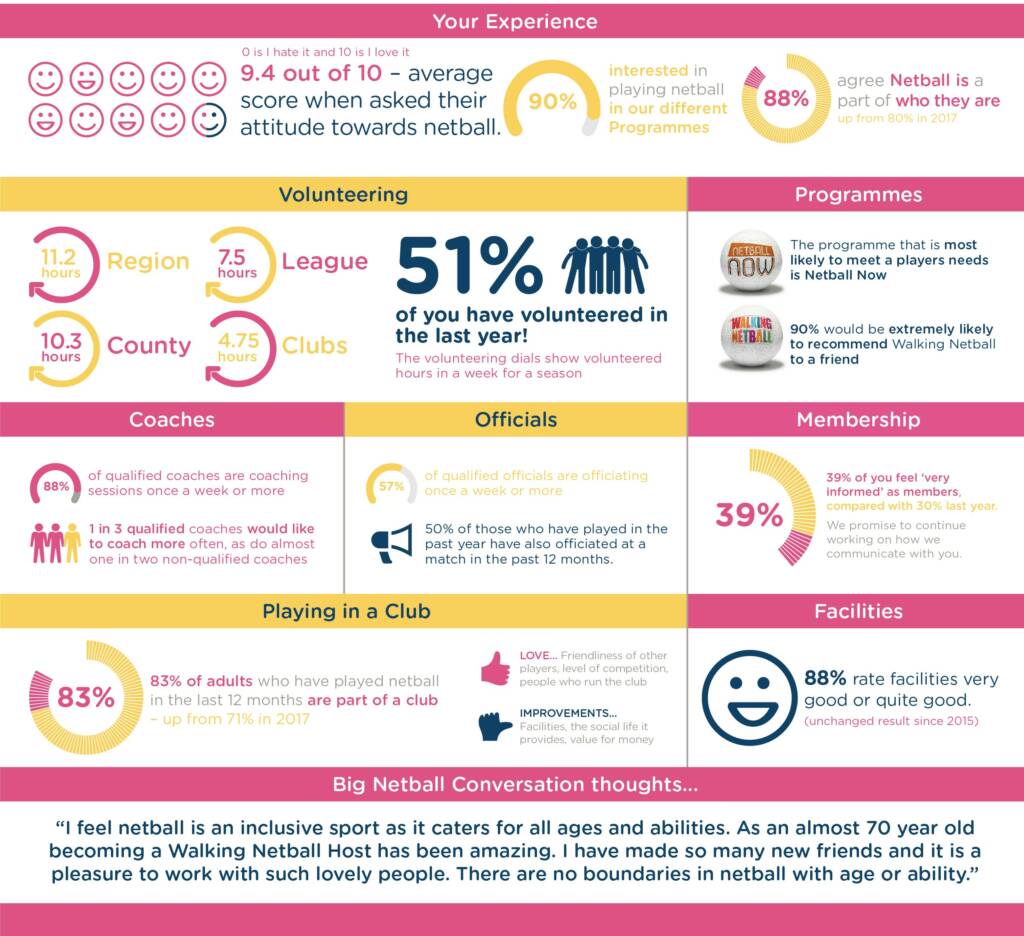 It is also great to see a higher proportion of you not only visiting our website daily, but following England Netball on our social media channels too. The proportion following England Netball on Instagram has more than doubled from 2017 (up to 26% from 11%). We will continue to provide exciting information on events, as well as even more news and information on the Vitality Roses on our social media channels so make sure you’re following us on Facebook, Instagram, Twitter and YouTube.

We know from previous surveys that we have not always been as good as we could have been at communicating with you, so this year we have worked really hard to improve this. However, we know there are still some areas that need developing. We want to work on further supporting our volunteers, umpires and coaches as there has been a fall in the proportion of all three groups feeling supported by England Netball.

Gary Burgess, Head of Officiating at England Netball, explains how we will work to improve the satisfaction of officials: “As part of our new Officiating Strategy we have identified a need for us to work more closely with our counties and regions as they hold the responsibility to deliver grassroots officiating. Improving conversion rates, from course attendance to full qualification is our highest priority.

“We know that many dedicated volunteers hold a number of roles in our Team White family, but we do need a constant flow of new Officials coming through to ensure good succession planning and so we can meet the demands from new participants. We also continue to work very closely with Netball Europe who direct our formal awards pathway to ensure timescales associated with becoming an Umpire remain as straightforward as possible to ensure more umpires pick up a whistle.”

Another focus for England Netball is player experience within academics. We are keen to work on this, as there have been declining views across many areas including value for money, advice on training and lifestyle, and injury management.

Vladan Dragosavac, Performance Pathway Manager at England Netball has outlined plans to improve the academy experience: “During the Vitality Netball World Cup 2019, we will launch the Player Development Framework to support players, coaches, support providers and stakeholders in understanding the age and stage appropriate pathway to develop a Roses player. The Framework will extend the principles of our ‘What It Takes to Win’ model throughout the pathway. It will be player-centred with a focus on creating rounded players through advice on training and lifestyle, and injury management.

“Also we are going to appoint a full-time Performance Pathway Coach Developer who will support all coaches in the pathway, which will improve their performance and standardise delivery.”

England Netball are committed to delivering a first class member and participant experience. We hope that with your continued support and feedback we can enable all involved in the netball family to collaborate as one team aligned behind one dream.

Vitality Roses to tour Australia in three-match series in October