My netball journey began, like many others, at school. I was 11 years old and my PE teacher asked if I would be interested in joining the school netball team. I was very shy, lacked a lot of confidence and was body conscious as I was not an “athletic” build like many of my peers. After much convincing by my parents, a supportive friend that agreed to go with me and the fact that my teacher had picked me out of everyone else I decided to give it a go.

The year after joining the school team, the local netball club in the town wanted to set up a junior section of the club and we were all invited to join. In my first season with Bodmin NC my parents divorced and a few months later my Mum was diagnosed with cancer, she passed away just 3 months later. I was 13 years old and felt that my whole world had been turned upside down. Netball was my escape. Every week I got that chance to be a child, and to think of nothing other than throwing and catching a ball with my newfound netball friends. I had also discovered a new side to me – when I stepped on court I was confident, vocal and my body shape did not matter.

I’m not going to say that I had always wanted to become a coach, that wouldn’t be true. I never thought I would be good enough so it hadn’t even crossed my mind. That is, until Sarah. Sarah had been one of the founding members of Bodmin NC; my junior coach and then my senior coach. She saw something in me that I did not see in myself, and she gave me the confidence and belief to attend a coaching course.

Fast forward to 2019 – I am now 30 years old and delivering multiple netball sessions a week to 120 members at Bodmin Netball Club, from our U12s all the way up to our Senior Regional Squad. If I had been told at the age of 11 that I would be doing this I would have been filled with absolute fear. The thought of standing up in front of people would have been one of the most terrifying things I could imagine. Telling someone you believe in them is a very powerful tool.

Every coach up and down the country, across all sports, will have their own motivators. I am frequently asked by people why I give up so much of my time and they often think I get paid for what I do, but I don’t. The reason I coach is because I want to provide that safe space to others – it doesn’t matter if they have had a tough day at school or have difficult family relationships, when they step on court they can forget and just live in the moment.

During my time as a coach I have been aware of some of the struggles others have experienced, such as depression, self harming, eating disorders, family/relationship breakdowns and bereavements – and these are the ones I know about. I’m sure that many other club members have been through, and are currently going through, their own personal battles.

It has always been well known that we need to exercise to remain physically fit, but it has only been in the last few years that there has been a larger emphasis on the importance of mental wellbeing. Exercise and team sports, such as netball, can have a positive impact on mental health. It creates support networks, encourages people to get out of the house, promotes learning and develops important life skills (communication, problem solving, creativity, etc.). Netball has provided me with all of these things – I have met some inspirational women that I am lucky to call my friends, it has provided me with confidence and strength I never knew I had, and I have been empowered.

At Bodmin NC we have now expanded to providing Mini Nets and Walking Netball (our oldest member is 76 years old). We don’t want anyone to feel their engagement in the sport is restricted by their age, ability or physical capacity. By coaching I am facilitating these opportunities for females of all ages from all different backgrounds. Many of the bonds formed now extend beyond the netball court, and we truly do have our very own netball family. For me, my hope is that I can be someone else’s “Sarah” and inspire others to fulfill their potential. As a coach it can feel like you are only one small drop of water in an ocean, but that drop can cause a ripple far beyond what the eye can see. 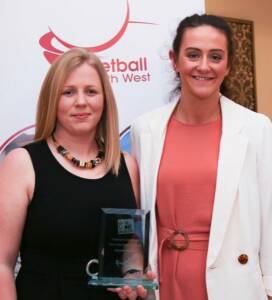 Previous Story Great Coaching changes lives: Caroline and Julia’s Story
Next Story As the dust settles on the Biggest Summer of Netball…