The netball community has been getting creative to help those affected by the coronavirus.

As the netball season continues to look very different to normal due to the coronavirus, the Netball Family have gone above and beyond, using their skills, energy and time to raise money and awareness for those who need it most.

Getting more and more creative in their efforts, the ever-supportive Netball Family have continued to show that helping others is at the forefront of so many clubs, teams and individuals’ minds.

One young netballer who got very creative with her fundraising is Emily Lane, a 15-year-old who took on the 2.6 Challenge, which includes any sporting activity with the numbers 2 and 6 in. She chose to score 2,600 goals in one day (actual goals, not just shots!), which took her nine hours.

Such an emotional moment when Emily finished her marathon 2,600 netball goals for the #TwoPointSixChallenge. Nine hours in the hot sun, and over £2,200 raised – she really is an Innovista legend. Well done Emily!

An amazing show of determination and perseverance, the talented shooter has raised almost £3,000 for Innovista International (and a big thanks to her dad Jason, who was ball retriever and head cheerleader!). You can donate to her fundraising page here.

Another example is the 1st and 2nd netball teams at Redmaids’ High School in Bristol, who have run, ridden or rowed 777 miles in seven days, which makes up the total number of goals they had scored over the past two seasons.

“By doing this, we wanted to raise money to support all of the amazing key workers within the NHS who are working tremendously hard through this troubling time,” say players Isabella Aulakh and Kate Harding who organised this. They have so far managed to raise more than £2,750 ­– absolutely smashing their target of £777 – and you can continue to donate here!

For many in our Netball Family, raising money for those in the NHS is very close to home, and NW Panthers Netball Club based in Chester are no exception, with many members of their club having family members on the front line. 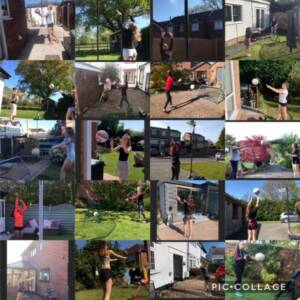 Challenging players to do 500 passes or 500 shots at goal with either a netball, tennis ball, football or rugby ball, and then nominate five others to do the same, Ginny Brooks has motivated hundreds of people to get involved, using the hashtag #500PassesDonate5Nominate5.

“As a netball mum, I wanted as many children to get involved from the sporting community,” said Ginny. “We believe this is a great challenge for everyone in the netball and sporting community to get involved and donate.” Show your appreciation and support for the NW Panthers Netball Club and their fundraising efforts by donating to their page here, which has already raised more than £2,000.

And finally, Vitality Roses Team Manager Paul Dring [main image] cycled 240 miles for ‘World In 1 Day’ to raise money for NHS Charities. A challenge to ‘donate your miles’ by raising £1 per mile you cycle or row, it’s an “unbelievably gruelling challenge that has shown the best aspects of the cycling and rowing community – the camaraderie and the positivity”, says Mark Beaumont, the record-breaking champion cyclist who organised the challenge.

Paul even had some familiar faces join him for a bit, convincing netballers including Beth Cobden, Gabby Marshall and Fran Williams to join him in the saddle (virtually!) for some of the ride, which took him a touch over 12 hours to complete. But even more impressive than that – he has so far raised almost £3,000 (you can donate here and help get him there).

We’ve been so impressed by the efforts made by the netball community – if you have been fundraising for a charity, however you’ve chosen to do it, let us know by tagging @EnglandNetball on social media or emailing content@englandnetball.co.uk.