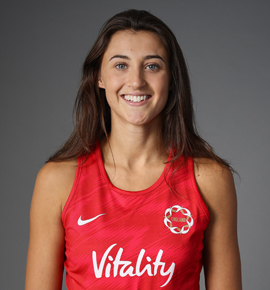 Beth Cobden has established herself as a specialist wing defence on the international stage since her Vitality Roses debut in 2016. Beth made her debut against Australia in the inaugural Quad Series and has since gone onto win more than 25 caps for her country.

After taking a brief spell out of the sport, the mid-courter became a regular fixture in Vitality Roses squads for the ensuing few years under Tracey Neville. Of all senior international competitions between 2016 and 2018, she was only absent for Netball Europe Open in 2017.

This continued period with the national team and her form in the Vitality Netball Superleague meant that she was selected for the Commonwealth Games in 2018. Beth started all seven games in the Gold Coast as the Vitality Roses won their first gold medal.

Her domestic career has mirrored her international success. Beth started her VNSL career with Manchester Thunder before moving to Loughborough Lightning, where was was named in the Vitality Netball Superleague All Star VII in both 2017 and 2018.

Fun Fact: Cobden has swum in the Amazon River.