International netball umpire Gary Burgess hopes his presence in the sport will inspire more men to get involved with the game.

The 41-year-old from Bedford, who now lives with his family in Norfolk, is the Head of Officiating at England Netball and one of the most respected men in what is the biggest female team sport in England.

Burgess believes his role in helping England Netball to launch their new 10-year ‘Adventure Strategy’ for the game – and taking part in an exciting photoshoot with other members of the Netball Family community – can inspire people who may not have previously considered the sport to get involved.

He said: “I am one of the biggest advocates for women’s sport and I am proud to work for England Netball and be involved in netball.

“I have always been welcomed with open arms in what is traditionally a female sport and would love to see more men involved in the game.

“As a company, England Netball have got everyone’s best interests at heart and the leadership within our sport is second to none.  Our new ‘Adventure Strategy’ sees a renewed commitment to opening up the game to new audiences and growing the sport at every level, and I am excited to be involved in that journey.”

Burgess first graced the sidelines of a netball court when studying Sport at what is now the University of Bedfordshire at the turn of the millennium and has never looked back and, now as one of the top international umpires in the world, can note the last three World Cup finals and every Vitality Netball Superleague final since 2008 among his umpiring achievements.

He explained how despite being a man in a female-dominated sport, he has never faced any resistance from those within the netball community.

“I’ve never really experienced any negativity, sexism or anything like that and I think some other sports can probably learn from that,” Burgess added.

“I’ve been welcomed into netball and never had any problems. Being such a high-profile role model does lead others to consider that they have a place in our sport. I believe in the saying ‘you can’t be what you can’t see.’ So there are other men in netball because of that representation and that profile, they see me umpiring and some of the other guys umpiring and can aspire to do it too.

“That really for me is the key to getting other groups of people from different backgrounds and parts of society into the sport to reflect modern England, in a multicultural group.”

Burgess first umpired internationally in 2006 and has since travelled the world as netball has taken him places he never dreamed he would visit.

“I always aspired to be an international player in something but never had that required spark,” he added.

“In umpiring you do get the opportunity, in a roundabout way, to represent your country on the world stage and experience all of those things that you would do as an international athlete.

“I came from humble beginnings of working-class family and only really ever went on holiday in this country. I never had aspirations, never even dreamed of going to places like Australia but I’ve probably been 14 times in the last 10 years, and then that’s just to Australia.

“I have also been lucky enough to go to New Zealand and the Cook Islands, Hawaii, the Caribbean, Africa and all over Europe with netball.

“The sport has opened those doors to travel and experiencing the world in a way that I probably wouldn’t have done ordinarily, and that continues to be a true privilege.”

You can find out more about officiating here and view the brand new Nike officiating range here. 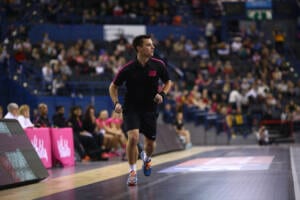