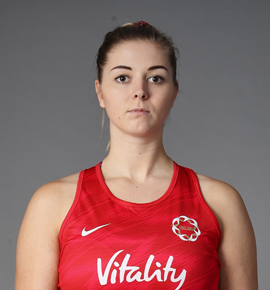 Eleanor Cardwell, a member of the full-time programme since 2016, is one of just eight players to have been selected as a Vitality Rose for the four consecutive years following the programme’s inception.

Eleanor has subsequently gained a substantial amount of international experience at youth and senior level. Since her Vitality Roses debut in 2016, she has obtained more than 20 caps for her country with her most recent coming during the recent South Africa test series.

The goal shooter first appeared in a red dress at Netball Europe in 2016 and retained her place for the inaugural Quad Series in which she tested her skills against Australia and New Zealand on home soil.

Eleanor, who originally started her professional netball career as a defender, has proven to be a regular presence in the shooting circle for her country with appearances at numerous Quad Series and competitions over the years.

Her experience made her Jess Thirlby’s starting goal shooter for the three-match test series with South Africa in November 2019 where she won three further senior caps to add to her growing collection.

The former Severn Stars player has become accustomed to success in the Vitality Netball Superleague having won three titles; a huge achievement at her tender age. ‘Ellie’ has won all of her honours with Manchester Thunder in 2012, 2014 and 2019.

Fun Fact: Cardwell has played every position on a Vitality Netball Superleague court apart from centre.