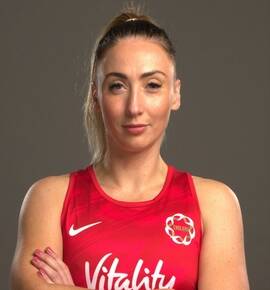 Jade Clarke has been a mainstay of the Vitality Roses ever since she made her debut against New Zealand 17 years ago, making 175 appearances for her country and becoming their most-capped netball player of all time.

Jade has appeared in four Commonwealth Games and five Vitality Netball World Cups during her time in the red dress. Her greatest achievement came in the form of the Commonwealth Games gold in 2018. The mid-quarter won her 150th cap in the 2018 final when the Vitality Roses upset hosts Australia by beating them 52-51 with a last-minute winner on the Gold Coast.

Her 17-year long career led her to play at her first Vitality Netball World Cup on home soil in 2019. The mid-courter played every game of the tournament which saw her win bronze and inspire 160,000 to start playing netball – or more netball – as a result of the competition.

Jade has also had a distinguished club career which has spanned over two decades and three different countries. She started at Loughborough Lightning and latterly Northern Thunder before spending seven years in New Zealand and Australia respectively.

Jade has shown no signs of slowing down and, after a hectic 2019 for the player, was selected for the three-match test series with South Africa under head coach Jess Thirlby. She will also complete her four consecutive season with Wasps after being included in their squad for 2020.

Catch up with Blue Peter netball feature on BBC iPlayer!