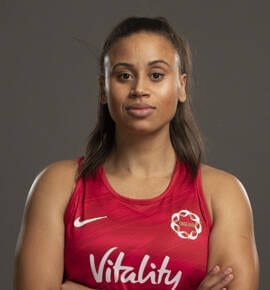 Laura Malcolm has been part of the international scene ever since she was called up for England’s U17 side and, after progressing through the youth ranks, made her debut for the Vitality Roses against Barbados in 2012.

She has since faced up against the world’s best national sides including New Zealand, Australia, Jamaica and South Africa. The experienced mid-courter has also represented her country at two Netball Europe competitions and multiple test series.

The year of 2019 proved especially fruitful for Laura, who went onto vice-captain the Vitality Roses in South Africa as part of a three-match test series which the visitors won 2-1. Head Coach Jess Thirlby handed the Wolverhampton-born player the same responsibility for the Vitality Netball Nations Cup in January 2020.

Laura has become a decorated player in the Vitality Netball Superleague having won three titles with Manchester Thunder in 2012, 2014 and 2019. She played a key role in their title-winning squads both on and off the court. She also enjoyed a stint with Severn Stars in 2017.

Where It All Began: Laura Malcolm