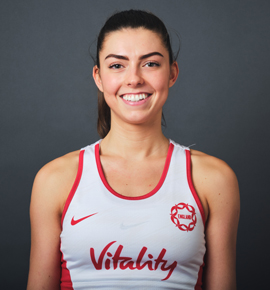 Zara Everitt has been playing international netball and in the Vitality Netball Superleague since the age of 16, announcing herself as one of the most promising players in the game.

The defensive star is still just a teenager but has already gained a vast amount of experience for her country.

She was first selected for a tour of Jamaica in 2016 before being included in the long squad for the World Youth Cup in Botswana in 2017.

Everitt was then recognised from her franchise Saracens Mavericks before the start of the 2017 VSNL season as they included the youngster in their senior squad.

Acknowledgement kept on coming for Everitt who was playing for the U19s and captaining the U21s despite her tender age at the time.

She recently made her first appearance at a senior competition in the form of Netball Europe Open in 2019 - winning the tournament in Northern Ireland.

Everitt has since left Mavericks and joined Loughborough Lightning where she made numerous VNSL appearances for the Midlands outfit before joining London Pulse for the 2020 season.