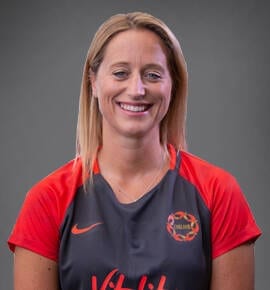 Vitality Roses Head Coach Jess Thirlby has been at the helm of the national side since July 2019 after an extensive playing and coaching career.

Jess' solid credentials stem from her 16-year record as an elite netballer and some 15 years as a netball coach.

She has held the position of England U21 Head and Assistant Coach during two World Youth Cups (Cook Islands 2009 and Glasgow 2013) and has worked as both an Assistant and Technical Coach with the senior England team (2013-15).

During her time at Team Bath, Jess consolidated her experience as an elite player to take on the role of Head Coach at the England Netball Intensive Netball Training Centre, which in turn led to her role as Director of Netball at Team Bath in 2008.

A former England international herself, representing her country at the 2002 Commonwealth Games, Jess' first competitive action as Head Coach was a three-match test series victory over South Africa.

All four nations gearing up for Vitality Netball Nations Cup