Laura Malcolm will join a new-look Trident Homes Tactix side for the 2023 ANZ Premiership.

Malcolm, who co-captained the Vitality Roses in 2020 and is one of England’s most decorated players with four Vitality Netball Superleague titles, has confirmed her move to New Zealand.

With 38 caps to her name, Malcolm said she would be fulfilling a dream of playing overseas and in the Premiership.

“It’s exciting to know that I’ll be training with and playing against a full cohort of New Zealand’s best athletes in the ANZ Premiership,” she said.

The midcourter, who can cover all three positions, made her debut for the Vitality Roses against Barbados in 2012. She has also captained Manchester Thunder in the Vitality Netball Superleague, helping the side to an unbeaten season this year en route to a fourth title.

Malcolm, who was born in Wolverhampton, said the chance to experience a different playing style alongside new players and under a new coach was an opportunity she could not turn down and she was looking forward to pulling on the Tactix colours.

“There have been a few English players who have featured at the Tactix over the years, and they spoke so highly of the club and of Christchurch. So when I met with Marianne (Delaney-Hoshek – Tactix Coach), I jumped at the opportunity,” she said.

“Lifting trophies with Manchester Thunder has been incredible, but it’s the personal growth and friendships that I’ve built at the club which I value most. My hope is that I continue to follow that path with the Tactix and I’m ready to embrace a new playing and coaching style so that I can take my game to the next level.

“And I also really love playing in a red dress.”

Tactix coach Marianne Delaney-Hoshek said she was looking forward to working with the team’s new midcourt, including Malcolm.

“Laura can obviously cover all three midcourt positions and will bring a bit of diversity to that area of the court which is really exciting. I saw her play for England and she’s a strong gritty player and will just bring that extra leadership to the midcourt as well having (co-)captained her country,” she said. 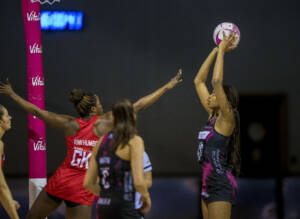