The Vitality Netball Superleague 2022 season is up and running!

Fans were treated to five high-energy matches on day one of the Season Opener weekend at Resorts World Arena in Birmingham with lots of Vitality Roses, Roses Futures and Roses Academy athletes involved.

After a tight opening quarter (14-11), the Midlands-based side showed their experience and class to accelerate away from London Pulse’s new-look outfit and establish an 11-goal half-time lead (31-20).

While Williams made her Lightning bow after her off-season switch from Wasps, it was a first-ever VNSL appearance for Roses Academy athlete Emma Thacker.

Talk about making a mark on your @LboroLightning #VNSL debut, @fwills11! 💜

Watch all the Season Opener matches live on @SkySports 📺 pic.twitter.com/MQ7f6QmG4I

New Team Bath captain Imogen Allison got her reign off to a winning start with a 54-40 victory. 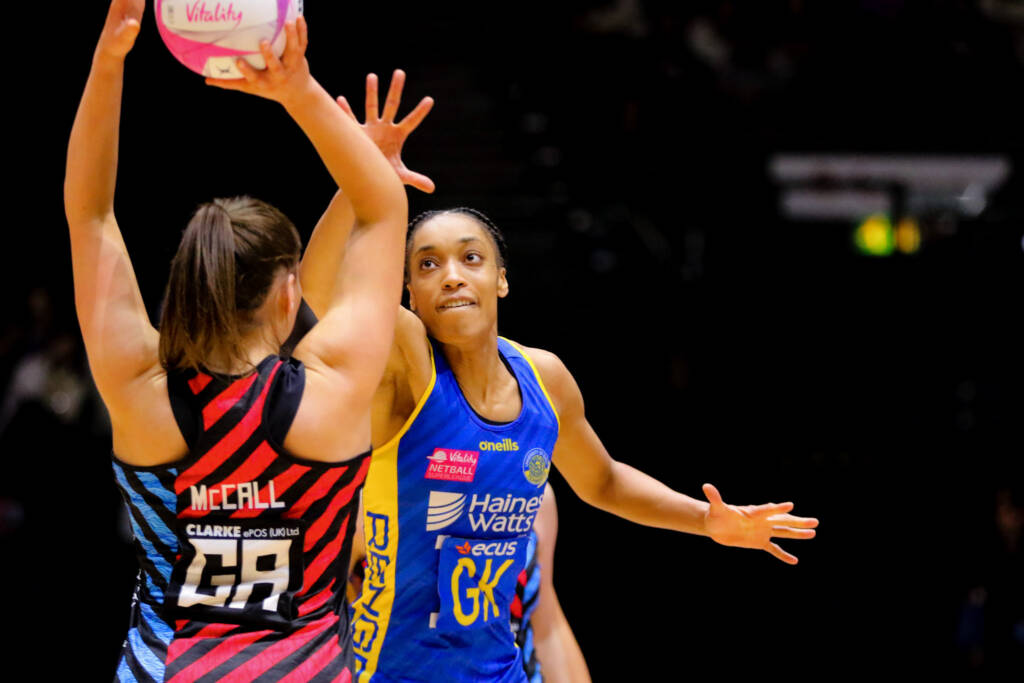 and Strathclyde Sirens were locked in a close contest right from the off.

After just six goals the difference at half time (26-20), five-time champions Team Bath took complete control after the break.

The Blue and Gold more than doubled their tally, while Layla Guscoth marshalled the defence to restrict Sirens’ attack, including teaming up with Roses Academy athlete Molly Hole in the final quarter.

Goal attack Sophie Drakeford-Lewis was named Vitality Player of the Match after her 15 goals and creativity helped Team Bath get their first points on the board.

Manchester Thunder made a statement of intent as they ran out 53-79 winners over Celtic Dragons.

It was a big day for Roses Academy athlete Yomi Eza-Wilson who started for Thunder after only being elevated from training partner to registered player two days before the season began.

There was plenty of fire and fight from Dragons on court, but it was Thunder, without the services of Natalie Metcalf due to injury, who were nine goals to the good at half time (38-29).

And the 2019 champions piled on the pressure as captain Laura Malcolm led by example with 12 feeds, one intercept, three deflections and two turnovers.

Her Vitality Roses teammate Eleanor Cardwell, who combined effortlessly with partner-in-crime Joyce Mvula in the circle, was named Vitality Player of the Match after notching up 14 feeds and 37 goals.

It was Saracens Mavericks who came out on top against Wasps in the battle of two former VNSL champions.

Gabby Marshall was back in action after surgery in November 2021 and Razia Quashie returned from injury, with the defender setting down an early marker of what to expect this season with a flying intercept.

The lead swung between the two sides in the first 30 minutes – winning a quarter each – but it was Mavericks with a slender two-goal advantage at half time (24-26).

The gap between the teams slowly started to increase with Mavericks clinical in converting turnovers and ultimately putting the contest beyond Wasps’ reach.

Commonwealth Games gold medallist Kadeen Corbin picked up the Vitality Player of the Match award having recorded 19 feeds to help her team to victory.

Severn Stars closed Round One of the VNSL 2022 season with a closely-fought 56-47 victory over Surrey Storm.

Roses Academy athlete Isabelle Eaton started for Stars and opened the scoring as the first 15 finished all square (13-13).

The energy remained high – both on and off the court – and the stage was set for a grandstand finish with Stars up by just two at half time (25-23).

It was a convincing second-half display by Stars to hand them the win over Storm and notch up their first points of the season.

Speaking afterwards, Severn Stars captain and Vitality Roses Technical Coach Liana Leota said she was “proud of the performance we put out on court today.”

The 2022 season continues with Round Two on Sunday 6 February at Resorts World Arena in Birmingham with four VNSL matches for fans to enjoy across Sky Sports and YouTube.