Vitality Roses shooter Jo Harten looks back at some memories in Roses red on Courtside – the official England Netball podcast.

From humble beginnings in Harlow to Gold Coast Gold, Lindsey Chapman takes Jo Harten back to some moments on court in the latest instalment of Courtside.

You can listen to this week’s episode on Spotify, Apple and Audioboom. 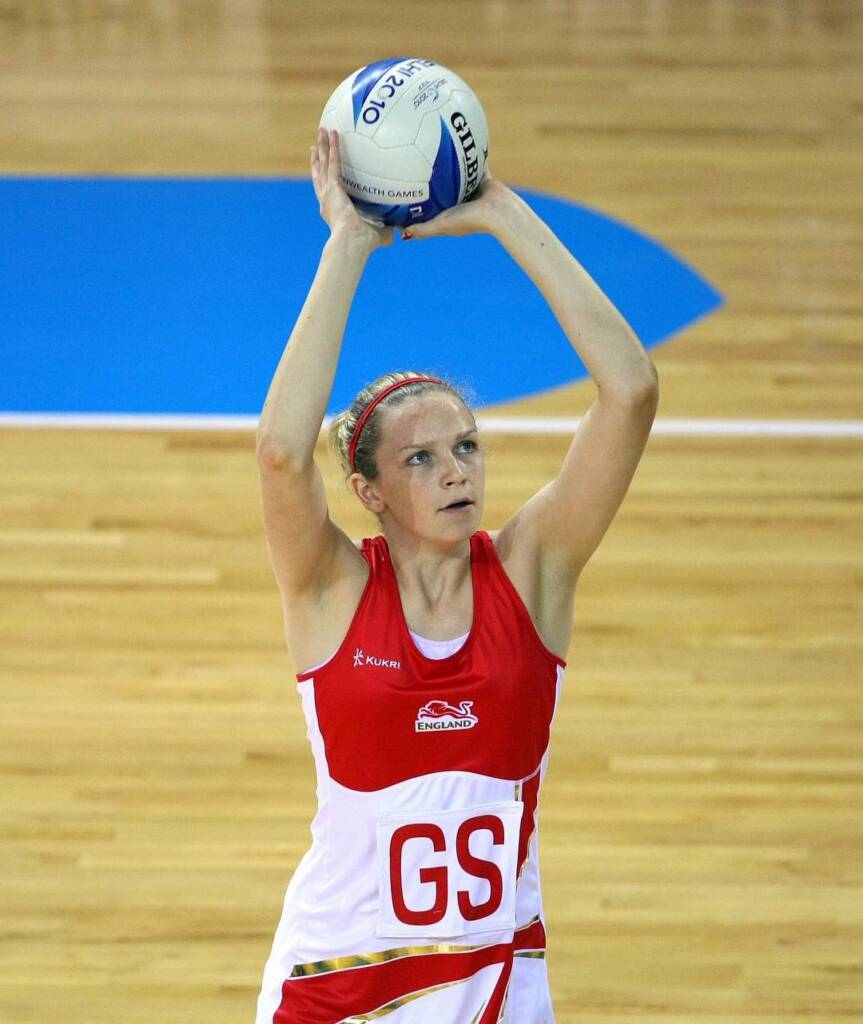 Getting to grips in Delhi

In 2010, Jo made her debut for Team England in India, three years after winning her first Vitality Roses cap.

Here the team claimed their third ever bronze medal at the Games but Jo fondly remembers the tournament for a reason many may not guess.

“That was my first Commonwealth Games. It was a weird experience because not many people play netball in India when they hosted the Games and I remember being there and soaking everything in, watching all the sports including netball.

“That was actually one of the best balls I’ve played with. It just had excellent grip, it was white and blue and it was really good to shoot with. If you’re on a good shooting day, it’s often because of the ball.”

“That Delhi 2010 netball would be in my top three netballs!”

Thanks to former Vitality Rose Sara Francis-Bayman, Lindsey was able to take Jo back to a celebratory shot from the 2015 Netball World Cup in Sydney. 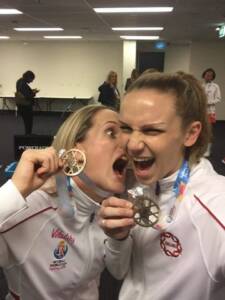 “I love that photo. That was actually one of my favourite memories from the Netball World Cup in 2015.

“Obviously here, me and Saz (Sara Francis Bayman) are elated that we’d finished and we were ready for the after party at this point!”

Three years later, Jo returned to Australia for a Commonwealth Games that would change history for England Netball.

“That was the Gold Medal Match from the Commonwealth Games in 2018. I’m playing against April Brandley in that picture who I now play with at GIANTS Netball. 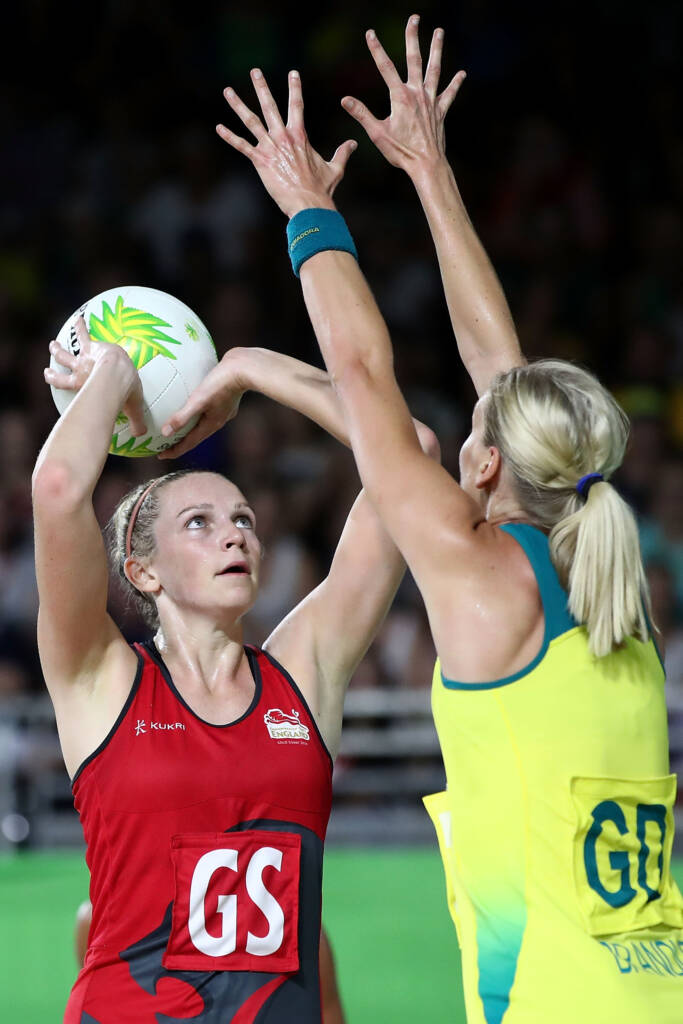 “I’ll never forget that game for as long as I live. It’s the game that changed the face of England Netball forever.

“I felt quite sick in the lead up to that game and I wasn’t sure whether I should go warm up but I remember playing on complete adrenaline and zero fear. We had the silver medal so anything on top of this would be a bonus and what a bonus it turned out to be.”

After matching the hosts for much of the game, England trailed going into the final quarter. But over the next 15 minutes, the team would rally together as 1.8 million people tuned in to witness a historic gold.

“I just couldn’t believe it. We were five or six goals down in that last quarter and I remember switching out to GA thinking ‘I don’t know if we’ve got enough in the tank to turn the game around’ but when Helen (Housby) got that shot under the post, it was so surreal.

“No one knew how to react. All I can remember is the crowd being stunned into silence and our team erupting. I remember Ama (Agbeze) coming up to me and throwing me about like a rag doll!”

4,410 days after making her first appearance for the Vitality Roses, Jo stepped out at the Vitality Netball World Cup 2019 in Liverpool for her hundredth cap for her country, becoming one of a handful of players to reach this feat. 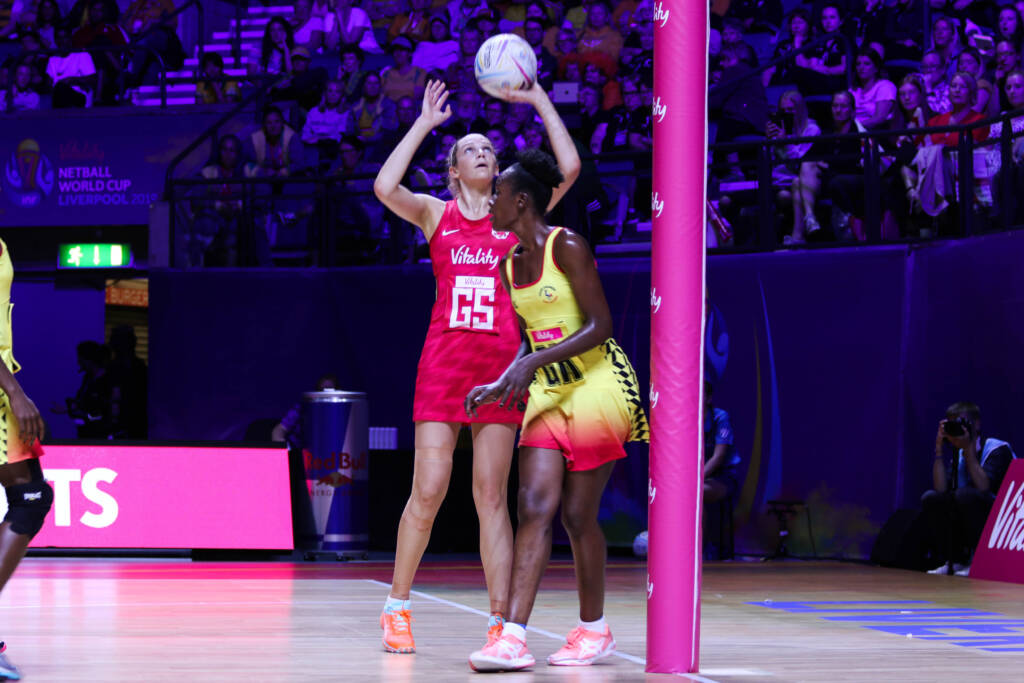 “This was my hundredth game for England at the World Cup. It was quite early in the tournament and it was really special to reach 100 games for my country.

“To be honest, I don’t remember much about that game at all.”

Where it all began

All of these memories for Jo wouldn’t have happened had she not started her netball journey back in Essex.

After getting her first taste for the sport at Harlow Sports Centre, Jo joined Tegate Netball and then Cross Keys Netball Club where Lindsey managed to find a picture of the shooter with her young team. 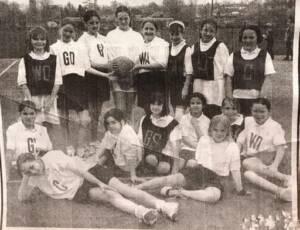 “Oh my god. Are you sure that’s me? I think I’m the goal shooter in the middle.

“Cross Keys Netball Club were the first team I competitively played for and I’m now starting to recognise some of my teammates. That was so long ago!”

Jo is now a full-time player for GIANTS Netball in Sydney and is one of the most recognisable players in the world.

Many young players will be hoping to follow in her footsteps and whilst Jo still encourages aspiring players to put education first, she hopes her experience with the Vitality Roses can inspire the next generation.

“My first piece of advice is always education. Even if netball is a viable career, I still feel the balance that is required to be an elite athlete, it’s more than just one segment. It’s not just about the netball, it’s about having other things outside your netballing life that even improve your performance on the court.

“But given where netball is going, it’s definitely a viable dream to play for the Vitality Roses. There are so many pathways and opportunities for young girls and young boys even now. The game is growing exponentially and it’s a really exciting time for young girls to look up to our Vitality Roses team and think that can be them in 5-10 years’ time. That’s the power of the sport.”

See all episodes of Courtside here