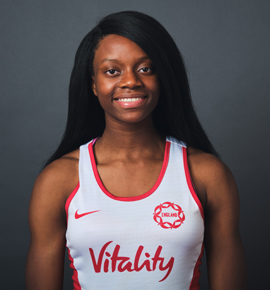 Funmi Fadoju has already made a sizeable impact since her introduction to international netball in 2017.

The promising young defender has quickly progressed through the age groups and is now playing against opposition well beyond her years.

Fadoju, who primarily plays at goal keeper, was being selected for Netball Europe squads before her 16th birthday and she recently made her first-ever appearance at a senior competition for her country when she won Netball Europe Open in 2019.

This was sandwiched between two more Netball Europe triumphs in the same year - at U17 and U21 level - and an U19 tour of Australia and New Zealand. Fadoju has also been included in the long squad preparing for the World Youth Cup in 2021.

Known for her outstanding athleticism, Fadoju has been with Vitality Netball Superleague franchise London Pulse since their inception and has been included in their squad for the 2020 season.