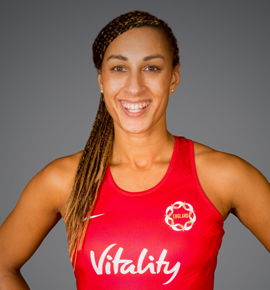 Geva Mentor first hit the netballing scene when she was selected for the Vitality Roses in 2000. Since making her debut against New Zealand at the beginning of the century, at the age of just 16, she has evolved into one of the most influential players in the team’s history.

The defender is one of the most recognisable faces in a red dress mainly due to her 146 England caps, appearances at major competitions and numerous international medals collected across two decades.

She has also represented her nation at a home Vitality Netball World Cup at the M&S Bank Arena, Liverpool, in 2019. Geva played an instrumental part in the team’s bronze medal and was among the competition’s top five in terms of deflections (33). This added to her collection of two World Cup bronzes.

Her domestic career is just as distinguished as her international one. She started her career with Team Bath in the Vitality Netball Superleague (VNSL) and won two league titles before moving to ANZ Championship side Adelaide Thunderbirds, where she won another title in 2010.

Geva then moved to Melbourne Vixens where more silverware followed as she became an ANZ champion with the club. After several years in Melbourne, she moved to Sunshine Coast Lightning in the newly-formed Suncorp Super Netball league and won back-to-back titles.

Fun Fact: Mentor is a travel lover and outdoors enthusiast.