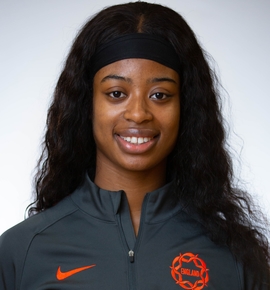 Olivia Tchine can play at goal shooter or goal attack and has done for her country across numerous youth levels. Tchine earned her first honour with England at U17 Netball Europe in 2017 before achieving another Netball Europe win with the U21 side in 2018.

The London Pulse player has also travelled on numerous tours to the likes of Australia and New Zealand and recently went on tour to those countries with the Vitality Roses.