The Vitality Roses beat the international Vitality Netball Superleague All Stars 67-44 on Friday night to take an unassailable 2-0 lead in the series.

There’s still one match remaining in the Vitality Netball Legends Series but England have already secured the Jean Hornsby Cup to ensure their return to court on home soil has been a success.

Similar to Wednesday’s opening test, the first half was fiercely contested before the Roses pulled away in the third quarter.

However, unlike that first outing, Jess Thirlby’s team didn’t allow the All Stars to respond in the final 15 minutes as they hammered them 18-8 representing the highest quarter-winning margin of the series.

And Jess was pleased to see her side making improvements: “Our focus for this series, irrelevant of whether it would’ve been Jamaica or the All-Stars, is to grow game by game and make sure that we’re tactically improving in the absence of training sessions between the matches,” she said.

“I think we were too slow in game one to tactically play around that kind of diamond defence that they applied to us in game one. So I was actually really pleased when I saw the starting lineup for the All Stars that they were throwing that back at us in the opening quarter and I thought we were much smarter in possession on the ball tonight.”

Jess has been able to observe all 14 of her players during the series – in addition to three Vitality Roses in the All Stars lineup – and there has arguably never been the depth of quality within the international setup that exists now.

And she reflected on how the squad has developed since becoming Head Coach: “I am happy because I think it’s a great question you know like if forced what would we do tomorrow if this was the last time we were to run out together, “ she began.

“What I think I’ve learned over the first 16 months in the job is that we’re a pretty relentless group, we’re quite robust now for all the obvious reasons but I think what we’ve learnt to do is how to get better when we’re not even together as a group.

“And then we’re really carving out these opportunities and giving them the respect and attention they deserve and hopefully that’s what’s come across even in these first two games, irrelevant of Jamaica not being here, we’ve really applied ourselves and kept that performance mindset.

“So I mean if you ask me if we were doing that tomorrow it would be it would be a tough one to call the 12 but that’s exactly where I want to be right now and as you say there’s still a little sprinkling of maybe some Jo Hartens and Geva Mentors to re-enter this fold as well which is exciting.” 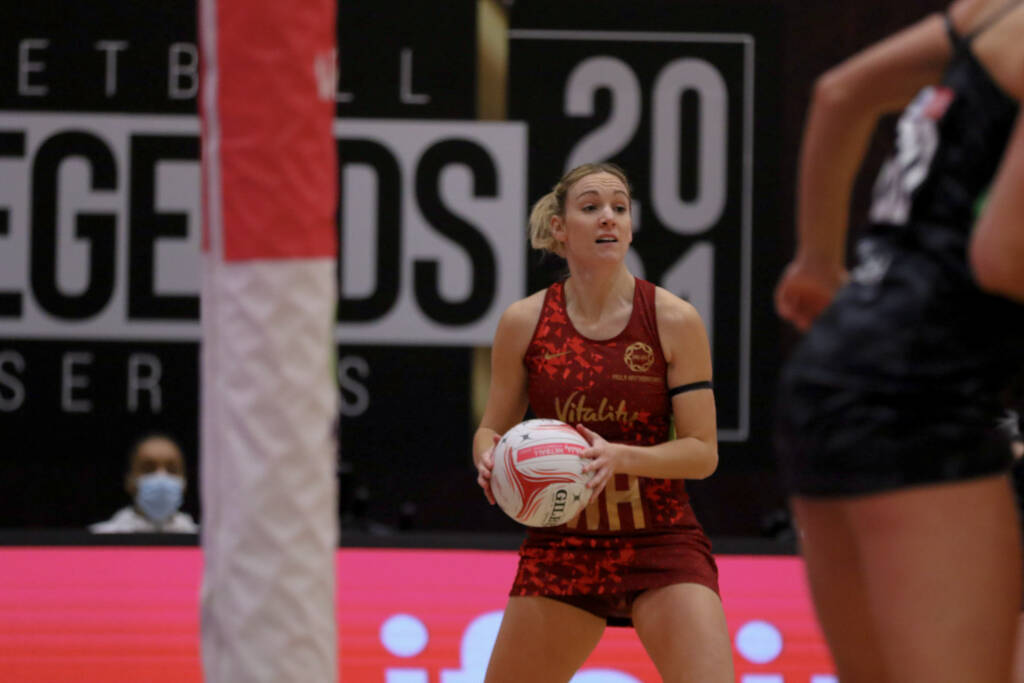 The News South Wales Swifts star spoke after the game about building on the opening test: “I think the first game obviously it was our (some players’) first game for the Roses in over a year so there is going to be a few nerves out there that will start.” she said

“The opposition we knew them individually but as a team we didn’t know how they would combine together as a unit so it was seeing what they would put against us. But yeah, absolutely we had real intent to start today’s game a lot better.

“We looked at areas where we could improve things that we really wanted to work on especially in the attack end and hopefully we did that. It felt like we had a better intent in the attack end.”

With another game to come on Sunday, Natalie also discussed coping with the demands of this intense schedule: “Physically we’re feeling good, we’re really well prepped within the Roses programme, we had a camp leading into the series so we were in really good hands with our S&C staff and the physios,” she explained.

“So we’re all feeling really sharp and to be honest we’ve been in the lockdown so we’ve just been raring to go to be honest, so physically we’re still feeling good and we’ll make sure we do all the recovery things best as we can.

“Obviously, we’ve got another game in 48 hours but I think it’s the adrenaline and just the exciting nature of being able to play netball right now. We are not taking that for granted at all and we’re just super grateful for the opportunity.

“I think the adrenaline kind of takes over and we just excited and happy to be out there so physically we’re doing good but ask me again in like 48 hours.”

Watch the third and final test on Sunday evening with coverage starting from 6.15pm on Sky Sports Mix and YouTube.