The Vitality Roses face off against the international Vitality Netball Superleague (VNSL) All Stars for the second time on Friday night following Wednesday’s 70-54 win.

The first match in the Vitality Netball Legends Series saw England tested in the first half as they edged both of the opening two quarters by three goals.

Often described as the defining quarter in netball, the third proved crucial in swinging the contest firmly in favour of Jess Thirlby’s side as they took it 20-12.

The All Stars valiantly fought back in the fourth to only lose it by two but the Roses ensured their return to the court on home soil for the first time in a year would be marked with a win.

Additional time together as a squad should see the All Stars improve, while the Vitality Roses are also regaining match sharpness so the second test should be even more compelling and with that mind, let’s look at some of the talking points.

Taking on a new team

Unlike England’s original opponents for the Legends Series, Jamaica’s Sunshine Girls, the VNSL All Stars have no history as a team together. Presenting a mix of different styles from various nations and VNSL franchises, it would have been difficult to devise a game plan to combat the All Stars’ approach.

Co-captain Serena Guthrie spoke after the game about the preparation they were able to do: “We’ve done some homework on all of the individuals in the All Stars team but tonight it was very much about seeing what they threw out at us.”

Having emerged with the win from the first game, the Roses should have a better understanding of the best strategy to defeat the All Stars.

A combination of injuries, breaks from the international setup and the Covid-19 pandemic meant a number of the highest-profile Vitality Roses hadn’t been seen in the red dress for a long time. 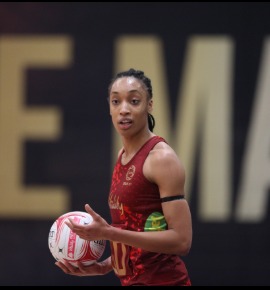 Natalie Haythornthwaite most recently appeared at the Vitality Netball Nations Cup in January 2020 where she was Player-of-the-Match on her 50th cap against South Africa. The watching public were treated to her sublime attacking link-up with New South Wales Swifts teammate Helen Housby, who was making her first appearance since the 2019 Vitality Netball World Cup.

Joining them in the starting lineup on Wednesday was another Netball World Cup bronze medalist in Layla Guscoth, who sadly ruptured her Achilles in the second match of that tournament in 2019. And completing the list of triumphant returnees was Beth Cobden, who suffered back-to-back ACL injuries meaning she missed the home World Cup in Liverpool and hadn’t pulled on the red dress since becoming a Commonwealth Games champion in 2018.

It was truly wonderful to see some iconic players turn out for the Vitality Roses once again.

There were plenty of fascinating match-ups to enjoy on court during the first meeting between the Roses and the All Stars, including the renewal of some VNSL rivalries.

Team Bath’s Serena Guthrie and Manchester Thunder’s Caroline O’Hanlon competed at centre with the intensity of their clash encapsulated in a moment in the first quarter where the latter clattered into the ground after the pair collided.

In the defensive end, Razia Quashie delivered a Player-of-the-Match performance as she applied great pressure to turn the ball over and deliver it down court. And she had to contend with Thunder and Malawi Queens shooter Joyce Mvula, who was in typically good form to pose a challenge to Razia and she was certainly up to it.

Mvula’s fellow shooter and Thunder teammate Eleanor Cardwell arrived for the Vitality Roses in the second half and made a phenomenal impact as she masterfully opened up space for herself in the circle. She was up against another Thunder and Malawi representative in the All Stars squad in Loreen Ngwira, who will hope to shut her teammate down more effectively should they meet on court together again.

The second test in the series is on Friday with the first centre pass at 6:00pm and coverage starting on Sky Sports Arena, Mix and YouTube from 5:45pm.