Gabby Marshall has just embarked on yet another Vitality Netball Superleague (VNSL) campaign with Saracens Mavericks.

The start of the season represents another chapter for Marshall in what has been a unique journey thus far. In fact, her story to the top includes tales of family, triumphs, setbacks and teddy bears.

“I got into netball because my sister used to play”

Marshall began playing netball before most of her peers. The Vitality Roses was first introduced to the sport when she was only four-years-old.

After regularly watching her sister at training, she was encouraged to take up netball by one of the coaches at the club. With the promise of a teddy bear on the line, Marshall couldn’t refuse.

“I got into netball because my sister used to play so I’d go along to her training sessions and watch her,” she said.

“I was actually bribed by one of the coaches who said, at four-years-old, that, if I joined in, they’d give me a really, really big teddy bear. I joined in, got the teddy bear and the rest is history.”

At the recent VNSL Season Opener, Marshall played across the midcourt and was able to change from centre to wing defence whenever her side required her to do so.

The youngster has made a name for herself in the black dress of Mavericks due to her engine and attacking prowess in the middle of the court which she demonstrated with a tremendous, long-range assist for George Fisher at Severn Stars last season.

This mix of work rate and creative output was seemingly crafted in her youth when she began playing the sport further up the court.

“At one point I played goal attack but it was only because we had a really tall shooter and I just fed her the ball,” she said.

“They basically realised I was a centre court player because I didn’t really put up any shots so that’s why I decided to then be a centre.”

“Jade Clarke was a huge inspiration and still is now”

Her sister was there right at the beginning of her netball journey and provided a helping hand in Marshall’s formative years.

Families are a large part of a netballer’s journey. They can provide support and, for this Vitality Rose, make regular trips to the capital to back their daughter or sibling.

“The biggest influence on my career to date would be my family. My mum, dad, brother and sister have all just been amazing throughout my netballing journey. They’ve supported me through the good times and the bad,” she said. 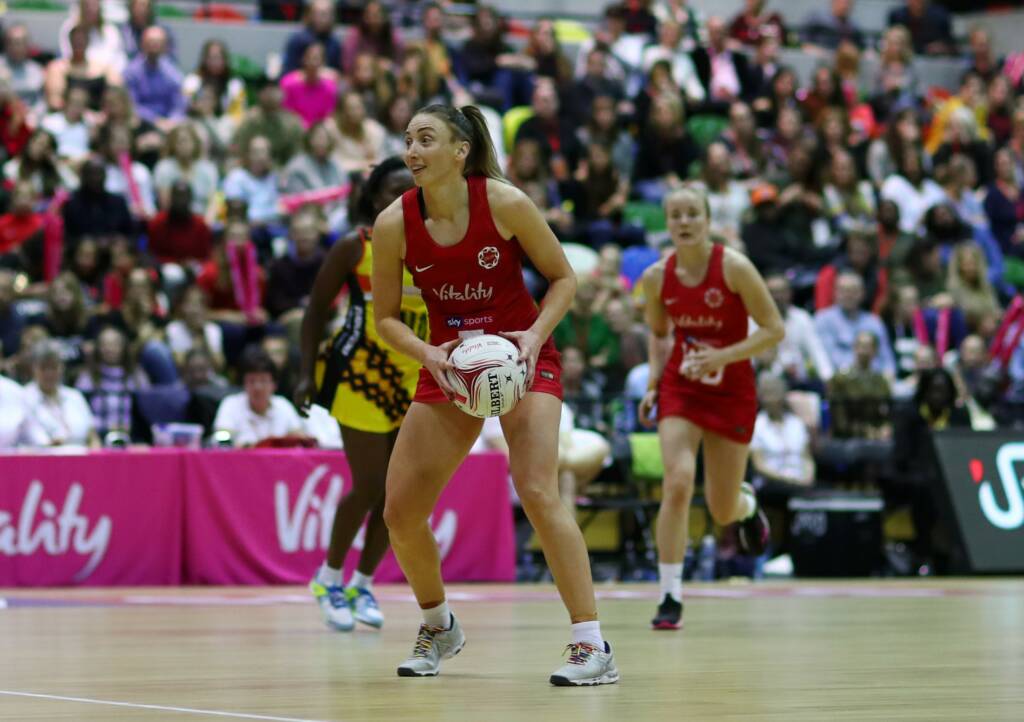 Jade Clarke and Gabby Marshall were on the same court against Uganda in 2018.

Having been part of the Roses Programme for the last three seasons, Marshall has also been able to learn from an idol of hers growing up in the form of Jade Clarke.

Marshall first played with Clarke, England’s most-capped netballer of all time, against Uganda in 2018 and the pair have grown to become close friends after spending time together as Roses.

“When I first started playing, Jade Clarke was at my netball club and is obviously someone that plays my position. She was just a huge inspiration and still is now,” she said.

“I’m fortunate enough to call her one of my closest friends which is crazy considering I used to queue up for her autographs at the end of England games. She’s a phenomenal athlete, a fantastic person and someone who is just a great role model to look up to.”

“My aim is to have a good season with Mavericks”

Now 23, Marshall captained and won medals – including bronze at the Netball World Youth Cup in Botswana three years ago – with her country at youth level before she made her debut for the senior side against Scotland at Netball Europe Open in 2017.

Her appearances for the senior side did not come easily though. She had to work hard to earn her place in the international spotlight after experiencing an early blow at her first England trial.

“I was actually named as a reserve at my first England trial and I remember being absolutely devastated that I wasn’t named in the team,” she said.

“Since then I’ve been fortunate enough to go on age group tours to Oceania, the World Youth Cup with the England U21s in Botswana where we got a bronze medal, and to win Fast5 gold in Melbourne.

“I’ve been in the Roses programme for three years now and have six England caps. I’m really proud of that.”

Domestically, she started the 2020 VNSL season in the best possible fashion and will be hoping to continue her fine form throughout the season as Mavericks aim for a top four finish.

After an injury-stricken 2019 campaign, keeping Marshall on court this season will be an absolute must for both player and franchise.

“My aim before this season started was to have successfully got back on court after six months out injured with a fracture in my foot, which I did with England A and in pre-season before Season Opener.

“I want to hopefully have a good, injury-free season in the Superleague with Mavericks and try and get some more experience representing the Vitality Roses internationally before the year is up.”