With the Vitality Netball Superleague (VNSL) Season Opener on the horizon, all players will be gearing up for another campaign of thrills and excitement in the United Kingdom’s elite netball league.

This includes those at five-time winners Team Bath who go into the season with several hungry, youthful players looking to build on last term’s third-place finish.

One of those young stars is Summer Artman but she, despite being just 22, has nearly half a decade of experience in the VNSL.

“Everyone knew that netball was my thing”

Artman rose through the ranks at Bath before breaking into the Superleague squad at the age of 16. She has now amassed more than five years of experience at the top level both domestically and internationally.

The Vitality Rose did start her career at Bath but then moved to Saracens Mavericks whilst studying Psychology at Brunel University in London. After three years in the capital, Artman returned to the Team Bath Arena.

Bath is a special place for Artman but it was in Bristol where she grew up, went to school and started playing the sport.

“I was always sporty. I was very tall and so my PE teacher threw me into netball in year three. I did like all the sports that we did in school. I did athletics, rounders, hockey and just thoroughly enjoyed all of my PE classes,” she said.

“I went to Colston’s School in Bristol and that’s where I played my first netball game. I would captain the team and be house captain of the netball team. Everyone knew that netball was my thing.

“I actually started being a goal attack or goal shooter. I continued shooting up until the age of 15 and then my NPL coach, Emily Perry, made me primarily into a goal keeper. Nobody really believes me because now I can’t shoot but I used to love it.”

“My biggest influence has always been my family”

Artman has had plenty of opportunities to learn from the best in the game thanks to her place in teams for the likes of England, Team Bath and Saracens Mavericks. She has already played with the likes of defensive powerhouses Layla Guscoth, Eboni Usoro-Brown and Stacey Francis to name but a few.

Artman, however, has looked at her family for inspiration and guidance throughout the entirety of her playing days. The youngster comes from a family with some serious sporting pedigree and this love for sport encouraged her to make a name for herself.

“My biggest influence has always been my family. My mum and dad were very sporty. My dad grew up playing rugby and my mum was actually a British champion in kickboxing. They always encouraged me to be the best that I can be within sport and in all areas,” she said.

“My mindset when I was younger was just making that extra effort and going the extra mile.” – Summer Artman

“From the time I could walk, my dad would throw balls at me and, if I caught it, it would mean that I would play for England. It’s funny now that I am actually playing for England so that did come to pass. He spoke it into existence.”

One player that does come to mind for Artman is Sharni Layton. The Australian defender played in the same position as her English counterpart and won all there was to win in the game before retiring to play Australian rules.

“I’m very tall. I’m just over 6’2” but I try to emulate Sharni Layton who isn’t as tall as me but has great agility,” she said.

“People always used to think because I was tall, I didn’t need to move. I always wanted to be tall and agile. Anyone who was agile, I would try to emulate them in my game. That’s still the same now.”

Her role models also keep her grounded and, despite the amount she has already achieved, Artman remains hungry to achieve the aims that she sets for herself.

Due to her rapid progress, she has had to continually readjust these ambitions. Artman made her VNSL debut at 16, went to a Netball World Youth Cup three years ago, and made her debut for the Vitality Roses at Netball Europe Open when she was still a teenager.

Yet, she still does not feel that she has reached her peak. Having seen countrywomen Geva Mentor and Usoro-Brown excel well into their 30s, Artman knows that she has time on her side when it comes to achieving her full potential.

“Even when I was seven, the aim was always to play for England but I didn’t know how to get there. It was only when I went to my first trial in year eight that they showed us the pathway and I realised that I wanted to get to the top 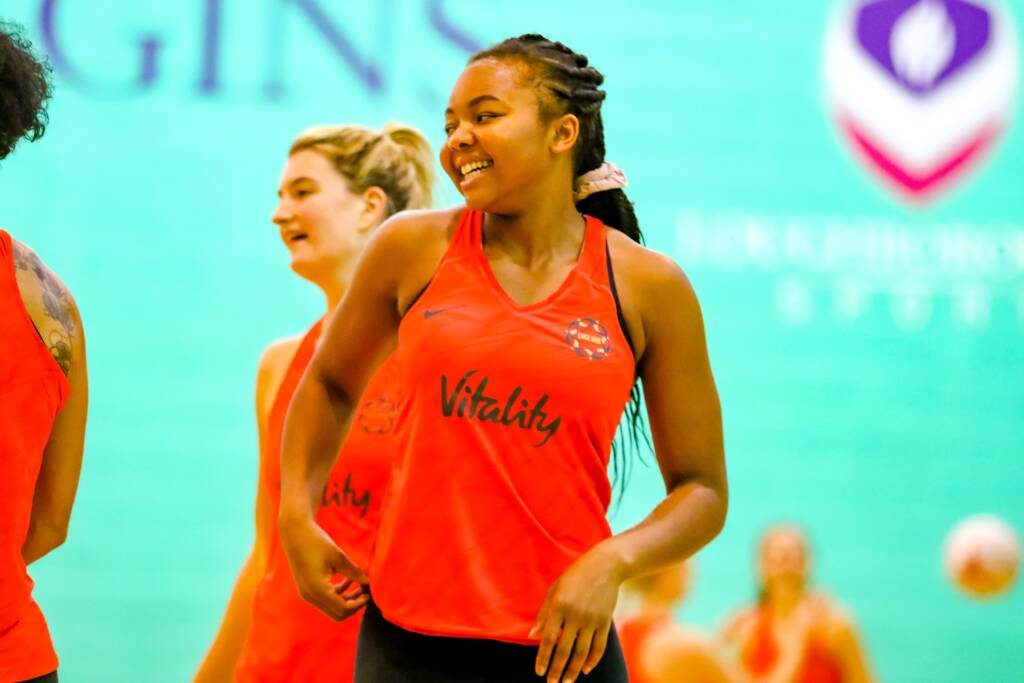 which was the England seniors.

“I don’t feel like I’ve reached my full potential yet. I’m very much at the beginning of my career and, even though I’ve had a lot of experience, I still have my own aspirations. I want every appearance for England to be positive and I want to win the Netball World Cup.”

“I want to build on the year I had in Superleague”

After travelling with the Vitality Roses on a tour of Oceania under Jess Thirlby late last year and being one of only a handful of players to be part of the Roses full-time programme for four consecutive years, her future is undoubtedly bright.

The distant future is currently not of her concern, though, as she continues to focus on the present and how she can continue to improve ahead of a hectic league season.