Iona Christian has recently started training with the Vitality Roses in Manchester and it has been a welcome return to court for the mid-courter.

This, alongside the news of her selection for the Roses Futures programme, gets 2020 back on track for the mid-courter who had been enjoying a new chapter of her short but distinguished career.

Christian (née Darroch) was just settling into life at Wasps Netball in the Vitality Netball Superleague (VNSL) having swapped Severn Stars for Coventry.

“I was doing it because I absolutely loved to play”

Wasps certainly have obtained a player of domestic and international pedigree. The 22-year-old has been a standout name in the VNSL roster for several seasons and this looks set to continue during her spell at the Ricoh Arena.

Internationally, the illustration student has made numerous appearances for England A and has won medals with her country at youth level. She has been a member of the Roses set-up for years and, under Jess Thirlby, toured Oceania with the Vitality Roses in 2019.

The spark of this upward trajectory can be traced back to her first year of secondary school when she started playing netball for the first time.

“When I first started playing, I was doing it because I absolutely loved to play. I enjoyed being with my friends, I enjoyed being fit, I enjoyed travelling. I didn’t really have a long-term goal but as I progressed into the NPL and VNSL, I then realised I wanted to be part of the Vitality Roses.

“Watching them play on TV and in major competitions, I soon realised my long-term goal was to be a part of them and to be a capped England player.”

Having grown up in the 2000s, Christian has almost always had access to live VNSL and international action on television. She has therefore had the opportunity to learn from those at the elite level since she was first introduced to the sport.

Growing up, Christian idolised the likes of Vitality Roses goal attack Pam Cookey and Vitality Netball World Cup 2019 winner Laura Langman. Now, she can call upon the likes of Natalie Haythornthwaite and Chelsea Pitman with England. 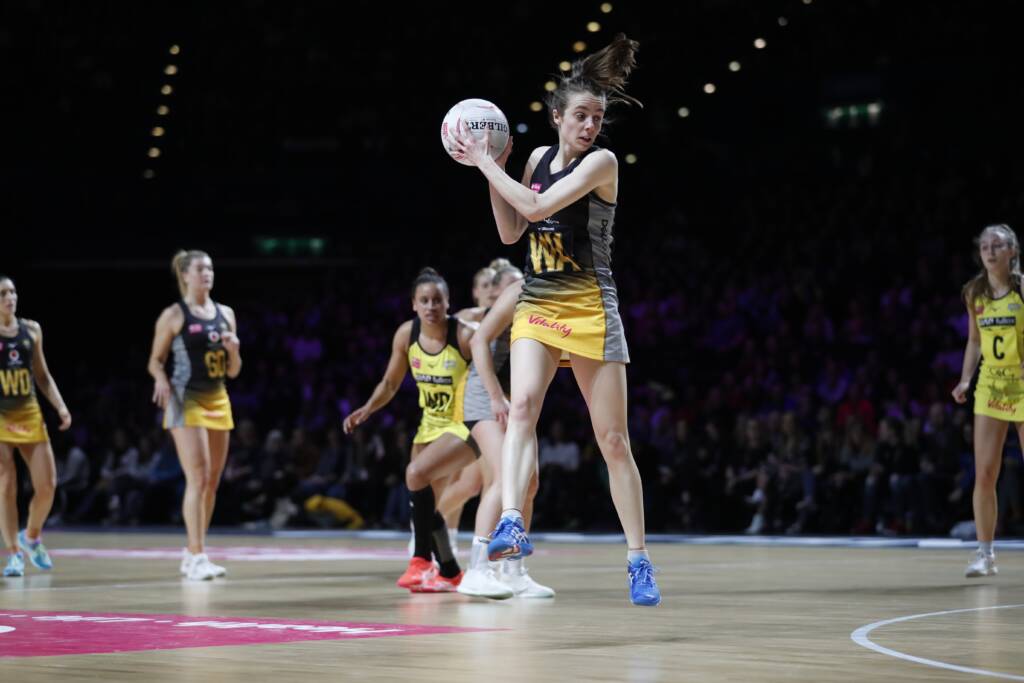 “When I started watching the VNSL on TV, my idol was Pam Cookey. Her footwork was so incredible to watch. She had a lot of flair and has so many caps for England. I was inspired by her and I wanted to play like her for sure.

“I am just looking at players in the centre and wing attack positions like Nat [Haythornthwaite] or Chelsea [Pitman]. There’s so many role models out there with so many different styles. Try to model yourself on their style of play but it’s important to stay true to your own style as well.”

“They’d sit in car parks while I went and trained”

While sporting idols and admirable teammates are desirable, the support of friends and family on a netballer’s career is essential. For this ex-Manchester Thunder player, her family provided inspiration during her early days.

Their contribution, which included driving to multiple training sessions during the week, was matched by her coaches too. Christian alluded to her first netball coach – her PE teacher – and a coach at her first club in Cheshire when it came to influences on her career.

“My parents have had the biggest impact on my career to date. Growing up, they were the ones that were taking me backwards and forwards to training, four times a week. They’d take me to matches on the weekends and sit in car parks while training.

“They really inspired me to carry on with netball and helped me to enjoy it. They’re still there at almost every game that I play. They’re really keen netball supporters and it’s amazing to have them as part of my netball.

“It was my first netball coach, my first PE teacher at school, who got me into netball and then she carried our year seven team all the way through to sixth form. She coached me for quite a long time. My coach at Wilmslow Lightning also pushed me into getting county trials.”

“I didn’t ever think I would reach this point”

Christian certainly made the most of those four training sessions per week and, via the Thunder pathway and England youth set-up, has already forged a strong career at the very top of her sport.

Iona played in all three of Wasps’ matches before the cancellation of the 2020 campaign. With the two-time champions, Christian will have hopes of adding a VNSL medal to her growing collection of career milestones.

Alongside tangible success such as medals or caps, Christian – who never thought she would be a fully-fledged international – is also hoping to continue to improve both tactically and physically.

“I didn’t ever think I would reach this point when I first started. I’m a very driven person and I always knew that I could make it if I put in the hard work but there’s been so many ups and downs.

“At those low points, I never thought that I would make it into the Roses set-up. I’ve been putting in the hard work and balancing it with the other areas of my life. I’ve been really enjoying it and that’s what has gotten me to this point.

“My aim is to learn lots, to really get stuck into the Roses Futures programme and to soak up everything I learn tactically and put that into practice on court. I want to get stronger and fitter over the course of the entire season too.”