In October 2020, Imogen Allison stepped on court for the Vitality Roses for the very first time against New Zealand in Hamilton.

In doing so, the mid-courter became the latest in a long line of players to make her debut for England’s senior netball team and first since Amy Carter achieved the same feat in January.

Allison’s time in a red dress may be relatively short but her journey to this point has been anything but.

“I got into netball in primary school”

Her debut for England brought her netball journey full circle having started out playing in an England Netball programme.

England Netball offers a range of activities to get children playing netball, most notably Bee Netball, and Allison was introduced to the sport in this way more than a decade ago.

“I got into netball in primary school playing High Five but I joined my first club when I was in Year 7 because all my friends started playing so it got me into that,” she said.

“I’ve always been quite sporty though. I did a range of sports in primary school and secondary school. I did gymnastics for most of the beginning of my life and then moved onto stuff like netball and athletics as I got older.

“I started off as a centre and I’m currently a wing defence / centre. I’ve been in the centre court really. I’m not really tall enough for the ends of the courts but in training I like to put up a shot or two but that’s just to dream.”

“Serena Guthrie was a role model of mine”

As a member of the full-time programme and a regular starter for a Vitality Netball Superleague side, Allison has been able to learn from more experienced teammates and coaches.

The 22-year-old has been able to play alongside the likes of Vitality Roses and Team Bath Netball’s Serena Guthrie, who said she was Allison’s ‘biggest fan’ following her debut in October.

Soaking up advice from more experienced netballers from a young age has helped shape Allison into the player she is today. 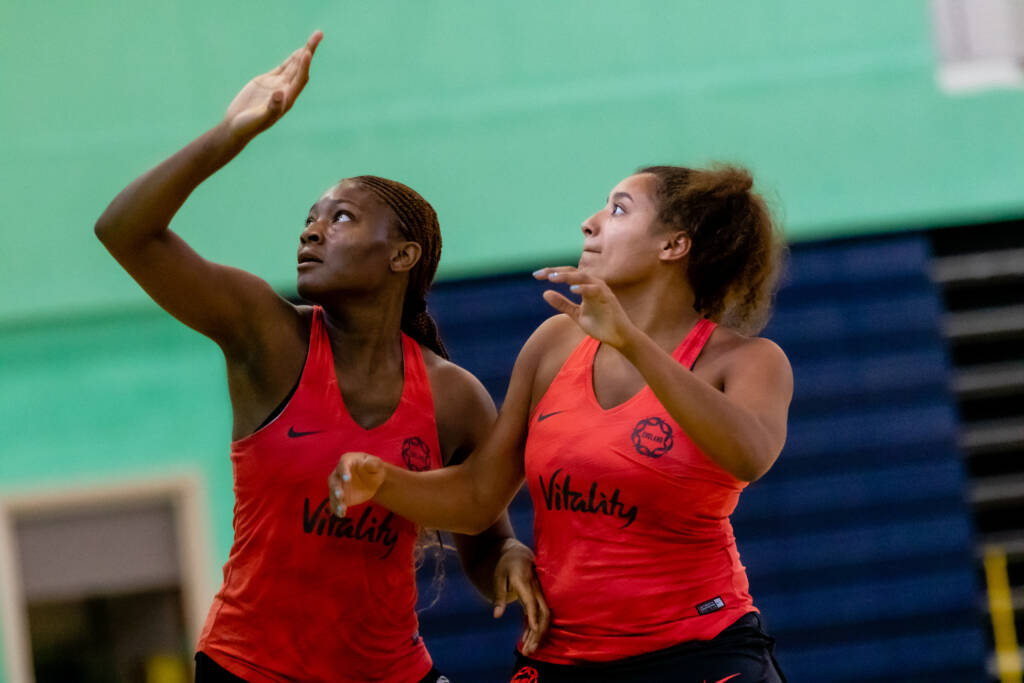 Allison has been training hard with her Vitality Roses teammates. Source | Ben Lumley.

“When I first started playing for my club, my school coach recognised that I could probably trial for district teams and county teams. My PE teachers were probably my biggest influence. They started me off and sent me to trials to get me to a higher level,” she said.

“Obviously coaches have had a huge impact. My first coach at my first club was such an inspiration to me and helped me realise that I had potential. Then, obviously, coaches help progress and also have such a huge impact.

“When I was growing up, Serena Guthrie was a role model of mine. It’s been so good getting to know her and now playing with her! Now, I’d also say Gabby Simpson. What she’s done in Super Netball over the last few seasons has been amazing. The way she plays is just incredible. She gets the ball like nobody else.”

The Sports & Exercise Science graduate may have only just made her debut but she has been involved in the England set-up for several years, beginning in the Roses Academy at 16 right through until she was 21.

Allison gained a taste of international netball through winning bronze at the Netball World Youth Cup, golds at U21 Netball Europe competitions, and various tours to the likes of Australia and New Zealand.

Stepping onto court in a red dress was always going to be a matter of when, not if. It’s something she has dreamed of since she first watched the Vitality Roses on television, even if she started just for fun.

“When I started playing, I was just playing for fun and just to be with my friends. I loved being active and being the sporty kid. As I progressed, I saw how good the Vitality Roses team were on TV and realised that’s where I wanted to be,” she said.

What an amazing experience! Extremely grateful for this opportunity, here’s to the next one👊🏽🌹 https://t.co/BDcnPI7YdO

“I didn’t think I’d reach this point and it’s such an honour to be here. As I progressed through academies, I probably thought if I worked hard enough I could probably do it.”

Vitality Roses Where It All Began
Previous Story Join us for the Vitality Goalden Globe Awards 2020
Next Story Happy birthday, Nat Haythornthwaite!