As you will have seen, the country is starting to see some lockdown measures relaxed and many businesses reopening, giving us some glimmer of normality resuming.

On Thursday 9 July, the Government announced that leisure centres will be able to open from 25 July. We are hopeful this will also expedite the full opening of outdoor netball courts.

We are continuing to work closely with the Government as well as other Governing Bodies and Sport England to plan and prepare for sport’s safe return.

We hope that it won’t be too much longer until we can all get back on court together at the community level, even if the game may look slightly different to the full form we are used to. With this in mind, we’re delighted to introduce to you our anticipated Roadmap for the return of community netball. There are however a few caveats to this that we hope you understand: 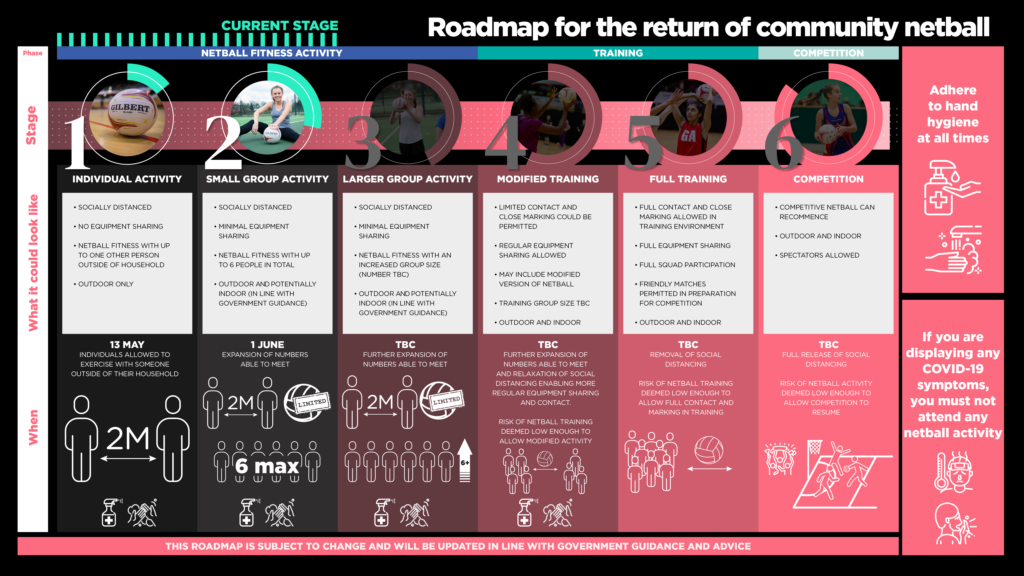 How will the Roadmap be used going forward?

At each stage of the Roadmap we will issue detailed guidance direct to all member regions, counties, clubs and registered leagues. We will also update our website and FAQs. In addition, at each stage the activity that you can take part in will be demonstrated via the Virtual Netball Club (VNC), so all members can see what they can be taking part in and coaches can gain valuable session ideas. You will receive an email each week with a link to the VNC.

Following the Government’s announcement on 9 July we have reviewed the Roadmap and we will remain in Stage 2 for now. We have also reviewed the the guidance for this stage and can confirm the following guidance is still applicable:

The most up to date guidance and FAQs can be found on the website here.

We know there is a lot of information to digest and England Netball is committed to supporting all members to prepare to resume. It will be necessary for us to adapt and change the ways things operate off court and potentially on the court as well, but we will continue to provide updates ongoing to support this.

In the meantime, please stay safe and keep active.