During the 2019/20 Premier League season, England Netball will shine a light on each of the 30 clubs involved in the competition.

Since the turn of the millennium, netball at the elite level has completely transformed. In front of sell-out crowds, the Vitality Roses and the Vitality Netball Superleague have helped dramatically increase the exposure of the sport.

Changes have also been present right down to grassroots level. In 1999, for example, England Netball proposed changes to its competition structure. As a result, a team in Norfolk was formed in light of the news.

Norfolk United was founded in June 1999 and has therefore been present throughout the majority of adjustments made to club netball in the country.

United – originally made up of a collection of smaller local sides – have ensured their success over the years by continually adapting to the evolving netball landscape.

This success is entirely interlinked with the prosperity of netball in the region and those who wish to play the sport. In fact, the original aim of the club was ensuring ‘existing players could continue to play and to offer talented athletes a chance to play in national competitions’.

“When county netball was abolished, we felt we needed a vehicle to keep grassroots netball alive in the county. That’s how it all first came about,” explained Karen Webb, who has been with the club since its inception.

“There were four local clubs that combined to make Norfolk United. The main thing for all of us was that juniors in the county still had a good training and competition structure, that’s why we did it.

“Our ethos always was for grassroots to be able to train in a safe environment, improve and get competition. Locally, if you come and train with us, you are going to have the opportunity to compete too.”

Webb originally started as a player but, despite being just a teenager, began coaching teams in the area. She has now been on the sidelines for the Premier League side for more than nine years.

“The most important thing for us is the feedback from people  who say they’ve never been at a club like ours before. We are very proud of our culture” – Karen Webb

She has dedicated her life to coaching others and has given up her full-time job as a designer to solely focus on the development of Norfolk United and its players. She now volunteers every day of the week and, with more than 40 teams of varying age groups, she is always in demand.

“For some of these girls, it’s about their growth as a person more than it is about being the best netballer. We have had so many success stories which aren’t directly netball related,” she said.

“We have had players build personal belief to go onto university or stories where girls have become confident after they were bullied at school. These girls are being given an outlet and we encourage everyone whether they wish to break through to Premier League level or not.

“Some of those who don’t go onto the top level have become volunteers, umpires, officials, and coaches. We’ve worked really hard on developing the all-round person and not just the netballer.”

The Webb family have a strong connection to the blue dress. Karen’s father stood as Chairman for decades, her mother is Treasurer, her husband became an umpire and photographer, and her teenage daughter is playing in the Premier League squad.

Chloe Webb, 16, is now a key factor in what has been a positive campaign for United. The youngster won Player of the Match in the recent victory over Exeter and is an example of the local talent which can be seen coming through.

Of the 11-strong squad, seven have worked their way up through the clubs’ academy sides. The team are now looking to keep their young stars, moving away from their two-year cycle enforced upon them, by maintaining a professional outlook.

“We do try and do things the right way. Before franchises formed, we were running a similar model operation here in Norfolk. We have to do a lot of fundraising so we can try and run as professionally as possible,” she said.

“From having the proper processes to designing promotional packs for potential sponsors, everything is very professional for what is essentially a volunteer organisation. We are just trying to bring netball to the forefront.

“Unfortunately, we lose players as they move away for university so we’re now trying to encourage more athletes to stay in Norfolk by forming a partnership with the University of East Anglia. The UEA have aspirations of climbing the BUCS league and attracting more high performance athletes to the area. We’ve had a couple of meetings but that needs to grow.”

While Webb takes the time to know everyone at the club, a large part of her focus remains on the fortunes of the Premier League side. United have been in the competition for eight years and are currently gunning for promotion to Premier League 2 for the first time. 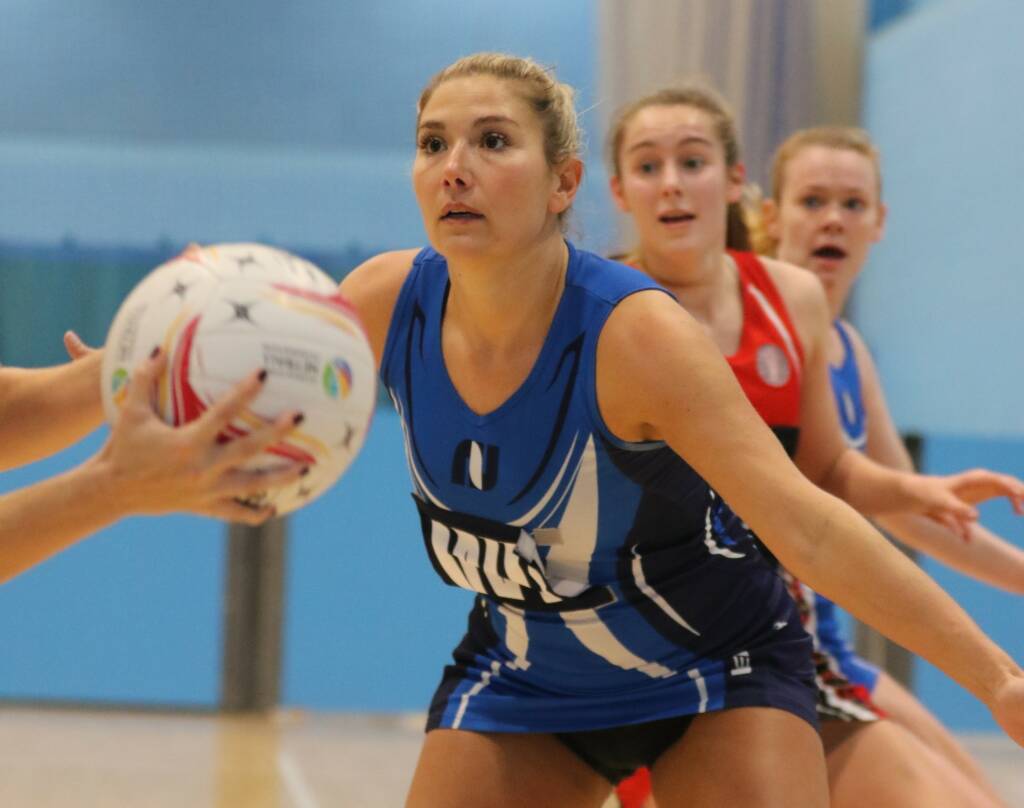 The young side currently sit in fifth place in a tightly-contested table. With four games to go, they remain just seven points off the second automatic promotion place which would mean the world to the squad.

A few tears were shed in the aftermath of the nine-goal victory over promotion rivals Exeter last week such is the passion these players and staff have for the club. Seasoned players such as Gill Wigley are ensuring this passion and commitment is passed onto youngsters like Phoebe Parker and Eliza Barclay.

“We take every game as it comes to make sure we’re in control of our own destiny. We are four games home and we know we can stay with that top pack. That’s exactly what we’re going to try and do,” she said.

“I couldn’t ask for more of these players and I was so proud of them last weekend. I gave a speech after the game and we were all emotional because the resilience of this squad is incredible.

“We maybe don’t have any international players. But we do have a couple of NPL athletes and a whole squad who work really hard for each other on and off the court for what we do have here. And because of that, we know we will be right there challenging at the end of the season.”

Due to her own commitment to Norfolk United, Webb has the unique opportunity to compare where the club started and where it currently sits. Most importantly, she can now use those learnings to plan for the future.

The 44-year-old coach has the long-term goal of securing promotion to Premier League 2 before she retires. Due to those 21 years of hard work, she has certainly given herself a huge advantage.

“I did think the club would be as strong as it is now because of the people we had on board, a lot of whom are still involved, and we were very clear of where we wanted to go,” said Webb.

“Back in the early days, we maybe didn’t have Premier League in our sights but as you grow you expect more and you keep on pushing the boundaries. We knew how we wanted to be as a club though and got there pretty quickly.

“Now it’s about sustaining and continuing to improve. You have to keep moving and we’re definitely a club always looking to evolve.”